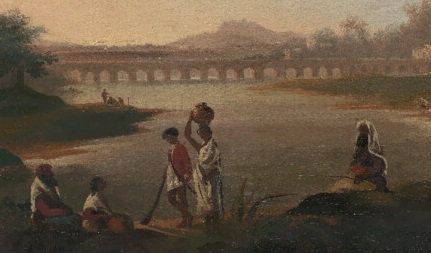 Some time in the late eighteenth century, Madar Khan, a South Indian Muslim, enlisted as a sepoy—a soldier—with the British East India Company, the face of Britain’s rapidly expanding authority on the subcontinent. He was one of several hundreds of thousands of Indians who composed the Company’s armies, making them the largest forces in the British Empire. To modern eyes, the resulting army can seem paradoxical: a colonial state resting on the military strength of those it subjugated, but it would be mistakenly anachronistic to apply contemporary ideas of national, racial, or cultural identity to sepoys like Madar Khan. Though the motivations that drove men to enlist with the Company are often hard to tease out of the historical record, they were never passive or unthinking. Madar Khan proved this in 1797, when he abruptly decided to leave the Company’s service. The catalyst for his departure came when the European commander at Madar Khan’s garrison in Ongole imprisoned a local holy man (a pirzadah). To Madar Khan, the punishment was unjust and thus voided his obligations to his employer. He used his status as an officer (a subedar) to persuade several dozen other sepoys to join him in deserting to the nearby state of Hyderabad. There, he was able to peddle his experience in the Company into renewed employment, this time with increased pay and even a promotion.

The Company’s Sword uses stories like that of Madar Khan to highlight how individuals, both European and Indian, moved between the East India Company’s armies and wider global networks. The book also confronts parallel efforts by Company officials to control the considerable agency and insistent mobility of its recruits. Determination to limit that movement became a preoccupation of the emerging colonial state, shaping both its internal and external policies. Indeed, Madar Khan only appears in the historical record because his desertion to Hyderabad became a flashpoint in the Company’s increasingly coercive diplomatic demands on the state, ultimately ending in his extradition and execution. Yet, even as the colonial state increased its ability to control military labor in India, the possibility of illicit mobility or, worse, open rebellion by sepoys loomed ever larger in the imperial imagination. The white officers who commanded the sepoy army fed those fears, presenting themselves as the sole figures who could prevent such unrest.

By the mid-nineteenth century, these developments had pushed the Company toward stratocracy—a state ruled by its army or, rather, its European officer corps, which predicated its claims to power on the perceived unreliability of their subordinates. The Company’s Sword ends, naturally, with the dramatic failure of that model: the rebellions of 1857, when sepoys led a massive series of uprisings in North India. As the British state bloodily retook control of India, it seized control of the colony from the Company. The Company’s Sword offers a new explanation for the rapidity of the Company’s dissolution, approaching its armies, not as tools of the colonial state, but as sites in which its ideologies were forged, contested, and ultimately shattered.

About the Author: Christina Welsch

Christina Welsch is Assistant Professor of the History of Britain and its Empire at Wooster College....