Written by: Miguel A. Valerio 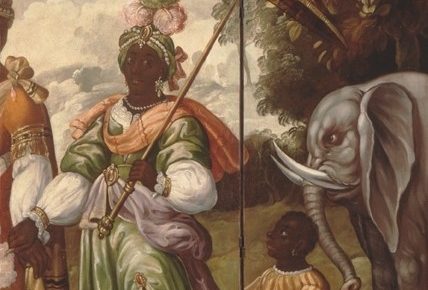 Scholars have long argued that slavery deprived men and women of African descent of sovereignty and that the violence it visited daily on their bodies and psyche closed all possibilities of joy. Indeed, in the summer of 2020, it was hard to think about Black sovereignty and joy as I wrapped up the book. But even then, Black men and women expressed their claims for justice and ontology through dance. Amidst litanies of anti-Black violence, the Black writer Imani Perry issued a call to see Blackness beyond its tragedies and instead through the joy that sustains the struggle.

Sovereign Joy: Afro-Mexican Kings and Queens, 1539-164 looks at how men and women of African descent exercised and expressed sovereignty and joy in colonial Mexico City, even when staging clamors for justice and ontology. It focuses on five instances when Afro-Mexicans performed “with their king and queen,” as one chronicler put it, in both public festivals and communal, intragroup occasions. It examines the sovereignty these performances symbolically and politically expressed before huge audiences and in group fiestas. It identifies confraternities, or lay Catholic associations, as the central sites of this autonomy. Dating back to the late medieval period, in the Iberian world confraternities allowed men and women of African descent to form community, care for each in times of illness and need, provide proper burial, and express their Afro-Catholic identity through devotion and festive practices.

Festive Black kings and queens became the most common expression of this identity, not only in Mexico City, but throughout the Atlantic world, from New England to the River Plate region. Sovereign Joy focuses on this tradition in Mexico City, the only Mexican location from which there is evidence of it, and where it had not been thitherto studied. The book demonstrates the political and material capital Afro-Mexicans deployed to stage these lavish displays of Black sovereignty and joy. Sovereign Joy thus invites us to rethink the Black experience in colonial Mexico and beyond.

As this tradition shows, Afrodescendants did not let the anti-Black ontology that oppressed them define their Being and daily lives. Instead, they found ways to exercise and express sovereignty and joy, to form community, to provide and care for each other, to bury their dead with dignity, and to make potent claims for justice and ontology. Sovereign Joy explores how this festive tradition helped Afro-Mexicans to achieve all this by allowing them to renegotiate their social status in colonial Mexico City.

About the Author: Miguel A. Valerio

Miguel A. Valerio is Assistant Professor of Spanish at Washington University in St. Louis. His research focuses on the African Diaspora in the literatures and cultures of the Iberian world. This is his first book....