The Italian Renaissance and the Origins of the Modern Humanities 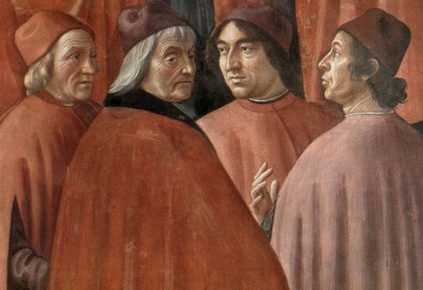 Why do the humanities matter? As Dean of a school of Arts and Sciences at a research university, I care deeply about the disciplines that fall under the rubric of the Arts and Sciences, which also include the natural and social sciences. But I am also a scholar of the humanities, whose focus has been on the European Middle Ages and the Italian Renaissance. I have become convinced that finding connections between those seemingly remote periods and our own can be meaningful to the humanities today. Why? I am not alone in the conviction that we are undergoing a time of significant change in how we are taking in information – in how we are “reading” the world. Bombarded as we are by algorithm-generated, unconscious-bias-confirming texts coming at us on phones, tablets, and computers, how can we make sense of them? Looking at how people in the past read can be productive for the present – not in a prescriptive way, but rather by illuminating the resemblances and differences that we can see among thinkers of the past.

As to the Italian Renaissance, the names and work of artists like Raphael, Leonardo, and Michelangelo are familiar to many. But the work of Italian humanists is less known. These Italian thinkers – who focused their attention on the ancient Greco-Roman world, usually wrote in Latin, and paid close attention to the humanities – are little read today, even as they formed the backbone of the Italian Renaissance. I wanted to find a way to allow readers to get to know figures like Lorenzo Valla, Angelo Poliziano, and others, by focusing in a detailed way on what they did with texts. Carlo Ginzburg and others long ago pioneered the genre of historical writing termed “microhistory.” Telling the story of, say, one specific person – and not necessarily a well-known or powerful figure – illuminated larger historical questions. Just so, I originally wanted this book to be a set of short examples that would serve a larger purpose. Seeing how Valla dealt with a short passage in the Latin Vulgate New Testament (compared to the original Greek) would show how detailed grammatical and philological work could yield, conceal, or reveal deeper messages. Observing Poliziano talking about the physical nature of books – how they were bound, what the handwriting looked like – would illuminate how he contributed to the discipline of philology. And so on.

But to connect to our world today, I realized the book needed a larger chronological reach than I had originally considered. It was not enough to investigate what Italian Renaissance thinkers did. I needed to trace the aftereffects of their work, even if they were only indirect echoes. And that question – how are we reading the world? – continued to press on me. As thinkers over four centuries faced changes in the technologies of reading – as they moved from an exclusively manuscript world, where every book was handwritten, to a world of printing with moveable type that grew gradually more sophisticated – how did they perceive these written texts? How did they judge which were authentic and which might be deliberate forgeries?

The more I researched, the more I came to realize that a seeming surfeit of information (what Ann Blair characterized as Too Much to Know in her book of that title) led to new ways of thinking about philosophy, new disciplinary categorizations, and even to conspiracy theories. To take once instance, there was Descartes, whose separation of mind from body natural science – what was then called natural philosophy – separating itself from philosophy as a whole. Then there was the seventeenth-century Jesuit Jean Hardouin, who believed that almost all ancient literature had been forged, by medieval theologians, no less, who in his conspiracy-addled view sought to give themselves a backstory for their (in his mind) heretical imaginings.

What stands out to me now is the role that Italian humanism played. The practices and mentalities that Valla, Poliziano, and others pioneered in the fifteenth century lived on, sometimes subterraneously. Reading texts with an eye toward their historical contexts, being willing to stand deliberately outside existing disciplinary structures, occasionally using fables or other non-standard formats as a means of philosophizing, and reading omnivorously across disciplines: these practices and more ran like a barely noticeable but structurally crucial thread throughout the rich texture of early modern European culture.

Writing this book, I was inspired by a phrase from the Sanskrit scholar, Sheldon Pollack, “making sense of texts.” Pollack co-edited a book, entitled World Philology, which brought together researchers working on textual traditions from all over the world. Some of the book’s chapters concerned European examples, such as the ancient philologists of Alexandria, who brought together the text of Homer as we know it today. But next to them sat examples from Chinese, Arabic, Hebrew, Japanese, and other traditions. That literary diversity yielded a question for Pollack: what is philology? In a bravura introduction, he defined philology as “making sense of texts.” In doing so, he made about as good a case as I have seen for the value of the humanities at large. The humanities are plural. There are many humanistic traditions that sometimes sit side by side with each other and other times prove incommensurable. And the humanities overlap with all the dimensions of our world, creating a vast web of significance undergirded by texts of all shapes and sizes. So, why do the humanities matter? Because they help us make sense of the bewildering variety of texts out of which our current world is made. Studying how people have read in the past won’t yield direct answers to today’s painfully evident problems of information flow. But looking at how thinkers in the past have adapted to changing media permits us to see the mistakes they made alongside their positive achievements. Doing so should inspire us to be adaptable, open, and willing to change.

About the Author: Christopher S. Celenza

Christopher S. Celenza is the James B. Knapp Dean of the Zanvyl Krieger School of Arts and Sciences at Johns Hopkins University, where he is also Professor of History and Classics. Former Director of the American Academy in Rome, he is the author of the prize-winning The Lost Italian Renaissance (2004), Machiavelli: A Portrait (2015), and The Intel...