Islam in a Zongo: Muslim Lifeworlds in Ghana 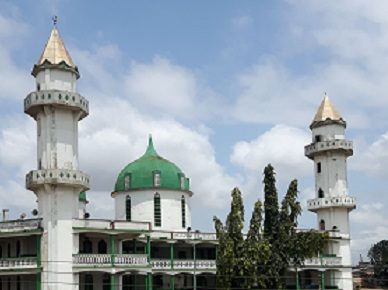 Islam has been present in Ghana at least since the 14th century and today, there are more than three million Muslims living in the country. My book, Islam in a Zongo, is an in-depth investigation into the recent history and current presence of Islam in southern Ghana. Drawing on ethnographic and archival research, I present and discuss how Muslim presence in the zongos changed over the twentieth century and how the people of these wards live their religion in their everyday lives. Zongos are wards of Muslim immigrants found across West Africa’s tropical belt where Muslims from the Sahel have settled down over the last generations. These immigrants are not only strangers to their surrounding Christian majorities but also to each other as they hail from different backgrounds and origins. Their shared religion provides them with a common ground on which to relate to one another, to intermarry, and to integrate into a Muslim community. Yet, Islam in the zongos is not a homogeneous whole but marked by an irreducible diversity and ongoing debates that are as much part of the changing history of Muslim presence in the country as they perpetuate it.

In pre-colonial times, Sahelian presence in southern Ghana was kept in check by local authorities, and the few Muslims allowed into the region mainly settled at the royal courts, working as scribes, diplomats, and traders. This Muslim presence changed significantly under colonial rule when numerous labour migrants and traders moved into the region and founded their own wards: the zongos. Within these wards, the Tijaniyya Sufi order superseded the previously dominant Qadiriyya order in the early 20th century and was to hold Islamic hegemony until the 1970s, leaving deep traces in the Islamic discourses, practices, and imaginaries of the people of the zongo. In the 1970s, when the people of the zongo experienced a severe social crisis due to their mass expulsion by the Ghanaian state, the Tijaniyya came under open attack by reformist scholars with whom they struggle for Islamic hegemony since then. The ongoing debates and mutual contestations of both groups are a significant part of the lived diversity of Islam in the zongos today.

I demonstrate this by discussing three central and contested Islamic phenomena in the zongos: people’s diverse prayer practices, their different conceptions and institutions of Islamic learning, and the ardently debated divination and healing practices. As I show in relation to prayer, everyday Islamic practices are part of and caught up with the ongoing controversies among the people of the zongo and therefore as much part of as contributing to the irreducible diversity of their lived Islam. The same holds for the transmission of Islamic learning in these wards which not only takes place in different venues but draws on and perpetuates distinct Islamic epistemes. These distinct epistemes also matter to the ardently debated divination and healing practices encountered among the people of these wards. Accordingly, lived Islam in the zongos is marked by an irreducible diversity and ongoing debates by the means of which the Muslims of the zongos engage with and perpetuate the discursive tradition of their religion. In the process, they remake and live their religion in diverse ways.

About the Author: Benedikt Pontzen

Benedikt Pontzen is an anthropologist and writer who has been carrying out ethnographic and historiographic research in Asante since the early 2000s. Besides his research on Islam, he also works on so-called 'African Traditional Religions', religious encounters, and lived religious diversity in the region. His work has been published in journals, i...