Sex and the Family in Colonial India: The Making of Empire 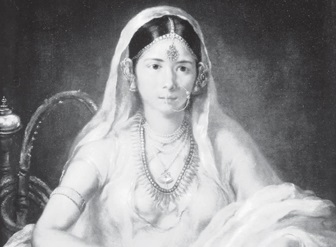 Earlier this year, my first book, Sex and the Making of the British Empire, originally published in 2006 gained some attention because of Bridgerton’s second season on Netflix. My book was about women who lived in India who married, cohabited with, or were enslaved by British and European officials, East India Company soldiers, and non-official Europeans who lived on the Indian subcontinent before the Company was disbanded and the crown took over the administration of the British dominions.

When Bridgerton came out, about a half dozen reporters contacted me to respond to the historical veracity of the second season of the series. Among the questions I was asked: was it true that a South Asian woman might have been circulating in the social circle of Regency-era London? How many women of Asian descent would have there been? Most of the reporters I spoke to were focused on confirming whether Bridgerton with its casting of South Asian actors to play two characters of Indian descent was a positive development for race relations in Britain. These questions are likely provoked by a particular set of assumptions about histories of colonialisms: as I understand it, surely if people of different ethnic groups slept together we can imagine that people of different cultures and background got along fine before British colonialism turned violent and racist.

But as anyone who has read my book knows, the point of my book was to argue that relationships between Europeans and women who lived on the Indian subcontinent did not generate happy families. Instead, as I showed, the family became an important site for the elaboration of racial and class distinctions, between fair-skinned children and dark-skinned children; between children who could be taught to speak English and those who spoke the languages spoken by their mothers. European fathers, particularly those on the upper end of the class spectrum, were anxious to ensure that their “natural children” were well taken care of financially, paying for the child’s return to the British isles, where a responsible family member ensured the appropriate type of schooling so that the child could be acculturated to British norms. In the nexus of family life in early colonial India, patriarchal behavior became closely aligned with the aims of the East India Company state which linked racial superiority to promoting “civilized” domestic behavior. Notably, women of Indian descent were frequently dispossessed of their children and left behind in India when their children moved to Britain.

One of the plot points in Bridgerton that resonates with the experience of Indian women historically is that some mothers are unnamed, and were thus presumed missing. They are hard to track in the archives and so historians have assumed they did not exist. In one of the features in the second season of Bridgerton that is unremarked in many media accounts is that the story of an unnamed Indian woman whose daughter is the heroine. The program revolves around two Sharma sisters who arrive in London from India, with their mother, Mary. Mary Sharma was the second wife of Kate’s father: Kate’s birth mother, who is never named in the show, died when Kate was a girl.  Mary Sharma, nee Sheffield, met and married Mr. Sharma when he visited England and they fell in love. Mary then had Edwina; Mr. Sharma died, leaving the three women without prospects, except the possibility of a suitable marriage for Edwina. That we don’t learn Kate Sharma’s mother’s name or what happened to her is not surprising: she may have died or she may have been living and relegated from the household once Lady Mary arrived in India. Without a name, Kate’s mother effectively goes missing from any textual archive, official or unofficial. In spite of her absence, she is very much a figure central to the story.

Kate’s absent and unnamed mother explains why Kate is so independent, why she carries the burdens for Mary and Edwina. Kate’s absent mother is likely the person who gave her the name, Kaitani, which is shortened and anglicized as Kate moves from India into the carefully choreographed environment of the London social season.  In a time when British occupation was in the process of being firmly and violently established in India, the figure of the woman of the Indian subcontinent was contained from contaminating the putative racial purity of the British family. This erasure occurred by naming, renaming, and unnaming Indian women, which solidified the racial and gender hierarchies so central to British colonialism. For the families that emerged from the intimate encounters between British or European men and local women on the subcontinent, there is almost always a mother who cannot be named.

Bridgerton’s narrative allows us to imagine a postracial utopia in which racism does not stand in the way of love; this is, as many observers have noted, a fantasy.  Embedded in the fantasy, however, with the unnamed presence of Kate’s mother is a sign that Indian women’s identities were kept out of the public eye and many archives in order to sustain the norms of respectability that were the foundation of elite British society in Regency England. Much about Bridgerton is fictional, but the existence of unnamed Indian mothers is true.

About the Author: Durba Ghosh

Durba Ghosh is Assistant Professor in History at Cornell University. She has co-edited, with Dane Kennedy, Decentering Empire: Britain, India and the Transcolonial World (2006)....