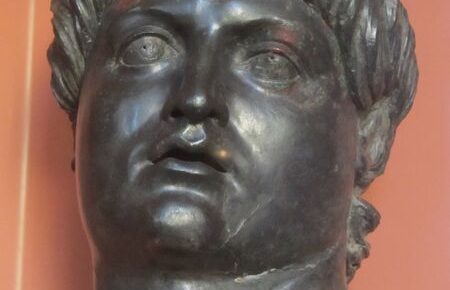 In the Spring of 1883, Oscar Wilde went to Paris to get his hair cut. Looking for a way to outrage bourgeoise society, he chose a bust of Nero from the Louvre to serve as the model for his new look. Wilde imitated Nero to confirm his own rebellious spirit to his friends and acquaintances, and what better way to achieve this than by evoking one of Rome’s most rebellious emperors. It was Nero who trampled on the boundaries of acceptable Roman elite male behaviour when he acted in public on stage, and Nero who built himself a Golden House from the ruins of a fire-ravaged Rome. But, as Wilde was well aware, ten years before his visit to the Parisian barber, the famous French intellectual, Ernest Renan (whose works Wilde knew and admired), had resurrected a far more sinister idea about Nero that had been prevalent amongst early Christians of late antiquity, that ‘the name for Nero has been found […] Nero shall be the Anti Christ.’

This is what I find so fascinating about Nero. To Wilde in 1883, the emperor was the embodiment of the limitless artistic freedoms that any decadent would hope for, whereas, to Renan in 1873, Nero had been the first beast in Revelation and would appear at the time of the apocalypse to help bring about the end times. In my book, I explore how images of Nero were exploited and manipulated according to the demands of context, with a particular focus on Nero’s place in Christian history as the Antichrist. While scholarly consensus has been that Nero should be identified with the various Antichrist figures in the bible (i.e. John meant him to be understood as the ‘first beast’ in Revelation, and Paul the ‘man of lawlessness’ in 2 Thessalonians), I suggest that these texts were written too early for one particular version of Nero to have taken hold across the empire. Instead, the first century saw a number of interpretations still in existence – from the emperor who liberated Greece from taxation to the people’s protector who forewent a trip to Egypt to ensure the grain supply reached Rome safely.

Once we begin to question the presence of Nero in the bible, other questions come to the fore. Why did early Christians, from the third to the sixth centuries CE, find it useful to insist their audiences should identify Nero with the Antichrist? And why, when the idea had declined in popularity, did it make a comeback in the second half of the nineteenth century? These were the questions I sought to answer in the book. I began my research as a PhD student at the University of Bristol, and finally submitted the complete (much revised) manuscript to Cambridge University Press as a lecturer in Roman history at the University of Roehampton. I have been lucky enough to talk about Nero on national radio in Australia (ABC’s Conversations) and in the UK (BBC’s In Our Time); for better or for worse, the emperor has never been far from laptop screen at any point in my career so far. In terms of the afterlife of historical figures, very few can claim one as complex and colourful as Nero’s.

About the Author: Shushma Malik

Shushma Malik is a Lecturer in Classics at the University of Roehampton. She has published book chapters and articles in international journals such as Classical Quarterly. Shushma has also featured as a guest on BBC Radio 3's The Sunday Feature: The Deluxe Edition and BBC Radio 4's In Our Time: Nero....