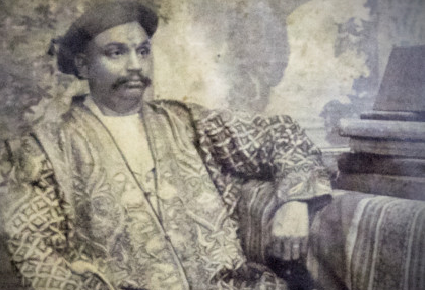 The Mughals of India – eponym of grandeur, source of the word ‘mogol’ – what kinds of records did they keep, and where did they keep them? For decades, this question has plagued historians of South Asia and the Islamic world.

The Mughal dynasty, descended from the fearsome Mongol ruler Chinggiz Khan on one side and Amir Timur (Tamerlane) on the other, established themselves in India in the sixteenth century and created the largest, richest and most densely populated Islamic empire of the early modern world. Although native speakers of Chaghatay Turkish, they adopted Persian as the language of their courts and administration, and created a bureaucracy so prolific that later historians called them a ‘paper empire.’ Mughal scribes spewed forth a surfeit of all kinds of documents – from grand imperial orders down to humble receipts – which remain scattered in museums, libraries and private collections across the world.

But where are the main archives of this vast administrative juggernaut? Having looked over and over again, and having failed to find even a trace of that elusive repository, historians concluded that the enormous dislocation caused by the English East India Company’s conquest of India, and especially the violent quelling of popular and military rebellion in 1857, must have led to a complete destruction of the Mughal archives.

But what if they never existed, not in the way that we imagine modern archives to be?

What if, instead of a serialized record everyday proceedings of government departments, courts and corporate institutions, stored in specific buildings, they were actually kept at home? We know that the households of wealthy and powerful families, from village landlords up to imperial nobles, had their own daftars (offices, in Indo-Persian usage), with clerks to facilitate scribing and copying. What if the Mughal regime maintained a pared-down record of key aspects of governance, mainly to do with the army and taxes, and allowed, nay expected people to maintain all other records relevant to themselves?

This idea – that the Mughal archives were actually principally household archives – came to me as I looked through series of ‘private papers’ – mostly in Persian, and some other Indian languages – acquired and stored in the National Archives of India, in Delhi. These 10,000 or so documents are individual slips of paper, such as the one displayed on this blog, granting rights, confirming them, disputing them, rescinding them and so on. They were made up of the collections of specific landed families, from all over what used to be the Mughal Empire.

Having chosen one such collection – of around eighty documents – I began creating a story of this the landed lineage that had originally created them. I began to identify the personalities, the generations, key external allies and rivals, and significant family events. I learnt that this was a family that had held several district-level offices in a place called Dhar in central India, from at least the sixteenth century, right until the twentieth. They had archived their title deeds, tax-farming contracts, receipts, records of legal disputes and associated testimonials. Eventually, I found more – another forty or so documents that had made their way to a museum in Kuwait, and finally, a whole raft of materials still stored in mansion of the family, whom I tracked down. Together, these documents tell a tremendous story of warfare, entrepreneurship, devotion, betrayal, love and loss, but above all, they tell us where to look for the Mughal archive: at home!

About the Author: Nandini Chatterjee

Nandini Chatterjee is Associate Professor of History at the University of Exeter. She has published widely on the British and Mughal empires, including her book The Making of Indian Secularism: Empire, Law and Christianity, 1830–1950 (2011)....