“Though we are but poor farmers by trade, we are quite prepared to render any assistance which may come to our reach to our British Government who is fighting for world peace.”– Ututu Clan Executive Committee in Southeastern Nigeria, to the King and Government of Great Britain

The Second World War has often been viewed as mainly a European war. But the war drew a global response and affected people who are often forgotten in the historical narrative. In the warfronts and at home, societies across the world were affected by what remains the greatest destructive war in human history. More recently, especially in regard to African experiences, the contributions of African soldiers and civilians and the impact of the war on their lives has received some attention. But it is interesting to note that not much attention has been given to the Homefront of the African experience.

As an historian of colonial Nigeria, I was intrigued when I came across a stalk of letters and petitions written by ordinary farmers and traders to British colonial officials most of which were reactions to the new regulations and restrictions imposed upon the Nigerian people in order to better direct resources towards the British war effort. I came to the realization that the Nigerian population, like many others in Africa, were not mere bystanders. As a colony of Britain, Nigeria was part of the British Empire, which actually fought the war rather than Britain—it was the British Empire that was at war. However, the pervasive neglect of the major role played by Africans colonies like Nigeria on behalf of the Allies is not only historically problematic but limits our full understanding of the war and its general impact on a global level. In what I have characterized as an imperial war, the declaration of war on Germany on September 3, 1939, by Britain made her African colonies active participants in the war against the axis. France, a country that was affected by German aggression also relied heavily on her colonies abroad for personnel and other resources.

In Nigeria and World War II, I tell the story of  Nigerian people and societies, Britain’s most important colonial possession and most prosperous West African colony.  I pay attention to the service of large numbers of African men overseas, the role that men, women and children played on the home front to support the Empire’s war effort. The mass mobilization of the population of various classes, traditional authorities, natural and financial resources and forced investment of funds in the war at the expense of their own budgets had short and long term consequences on Nigeria. In doing so, I challenge the dominant perception by historians that the Second World Wars was mainly a European conflict—at least in terms of the contribution of ordinary people, the preponderant role played by non-combatants to support the war effort, and their impact globally. I underscore the complexity and diversity of the global experiences of the Second World War, illustrating that there is no single societal experience, but many experiences. As a British colonial territory during the war, Nigeria’s experience of the World War II was shaped  by the relationship between Britain as an imperial power and the hegemonic control it had over Nigeria as a colony.

As I outline in the book, the war both triggered new forms of relationships between metropole and colony and extended the frontiers of imperial control of Britain’s disparate colonial possessions. Nigeria epitomized this changing relationship as a result of the war and how the war affected people, led to the reorganization of production, distribution and consumption of commodities as well as reshaped social and political structures. Indeed, through their role as individuals at home, soldiers in the warfront, production of propaganda, Nigerians created opportunities for redefinition of the relationship between “metropole” and “colony” and post-war relations. 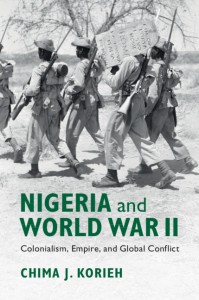 About the Author: Chima J. Korieh

Chima J. Korieh, Marquette University, Wisconsin Chima J. Korieh is Professor of History and Director of Africana Studies at Marquette University, Milwaukee where his research focuses on West African economic and social history in the colonial period. He is the author of 'Life Not Worth Living': Nigerian Petitions Reflecting an African Society's E...