Why do people adore tiny things? From souvenir keychains to dollhouses, Christmas ornaments to refrigerator magnets, the act of shrinking a life-size thing to a smaller scale has an influential effect. The object is now cute, more accessible, more delicate, more “squee”. It is also more helpless, and thus controllable – comforting and completely non-threatening due to its diminutive size. The miniature is so compelling because we can love it, and it cannot hurt us. Yet, as I argue in Figurines in Hellenistic Babylonia, there is much about small-scale objects that our squinting eyes cannot see and our clumsy fingers cannot touch. Far from disenchanting us, these micro details are charming, luring us back to the encounter with the hope of discovering more.  As a result, we bring the miniature object into our own personal space time and again – into the palm of our hand, within inches of our eyes – offering intimacy in exchange for the hope that the tiny thing reveals its secrets.

Because of this direct, unmediated access to the minds, bodies, and hearts of their users, miniature objects are a powerful tool for the subtle dissemination of social ideas and values. It is no accident that most tiny things evoke traditional cultural norms: miniature brides and grooms on wedding cakes, nostalgic vacation vistas on refrigerators, steam trains and pastel Victorian mansions make the nineteenth century a favorite plaything of twenty-first century children.  In times of social change and upheaval, when those cultural norms are being renegotiated, miniatures have a similarly powerful role. They allow low-stakes experimentation with traditional values, offering the possibility of change – and the option of literally crushing that change, should it offend. What might be threatening to think about in the real-scale world can be more manageable and more conceivable in miniature.

This book explores such a situation of cultural change and the role of miniature objects in mediating and facilitating that change. It concerns the Hellenistic period immediately after the conquests of Alexander the Great, when Greek and Macedonian people immigrated into lands in the Middle East, including Babylonia (the southern part of modern Iraq, near Baghdad).
In this world-changing historical moment, when empires clashed and new kingdoms were formed, everyday people used figurines – miniature depictions of people, animals, and gods, mostly made of cheap terracotta – to figure out their place in a new, multicultural world.

And what do those figurines reveal? Primarily, that these communities were careful to develop common ground between cultural groups. Shared belief in lion-hunting god-heroes allowed figurines of Herakles to flourish. Babylonian figurines of nursing mothers were given new Hellenistic-style clothing and poses. Entertaining and easily palatable Greek imports, such as comedic theater and acting, were accepted and reproduced in figurine form. In contrast, Greek traditions that offended Mesopotamian sensibilities – such as the celebration of the nude male body – were marginalized in miniature. Thousands of figurines, the personal possessions of thousands of people, reveal over and over that the new social norms of Hellenistic Babylonia preferred to downplay cultural difference and distinctiveness in favor of shared values and social cohesion.

While this has profound consequences for how scholars study the Hellenistic Middle East – not only as a place of heightened cultural tension, but also as one with common, deliberate efforts at inclusiveness – it also has broader implications for how we understand miniature objects. The tiny things that we own say a lot about us, our values, even how we think about our neighbors. The next time you look at your keychain, or your fridge, or the cute (tiny) photo you chose as your phone’s background screen…think about what it says about you. 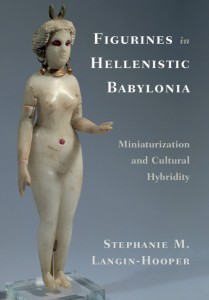 About the Author: Stephanie M. Langin-Hooper

Stephanie M. Langin-Hooper is Assistant Professor and Karl Kilinksi II Endowed Chair in Hellenic Visual Culture in the Department of Art History at Southern Methodist University, Texas. She is co-editor of The Tiny and the Fragmented: Miniature, Broken, and Otherwise Incomplete Objects in the Ancient World (2018), she served as lead curator for the...