Think for a moment about ancient art. What does it conjure up? You may think of sculpture, like the Nike of Samothrace; or busts of Roman emperors; it may be that the treasures from the Egyptian pyramids come to mind; or it could be the pyramids themselves, or other architectural gems like the Parthenon. They are monumental and/or imperial. They are easily recognised as ‘artistic’ and, even better, their artistry is often accompanied by or even alluded to in ancient texts of the time. But what if ancient art is none of these things? What if there are no recognisable artists or even subjects, and what if the most stunning works are miniature not monumental? These are the challenges that Aegean Bronze Age art presents, and which I confront in my new book.

Aegean Bronze Age art has certainly attracted plenty of attention, as well it might with its remarkable frescoes from sites like Knossos and Akrotiri, its striking relief stone vases, its gold finger rings with scenes of divine epiphany, and many other highly creative works across a range of media. However, most of the synthetic art historical treatments were written decades ago. More recently the field of Aegean prehistory has been dominated by anthropological approaches that foreground more everyday artefacts and their archaeological contexts. Such an emphasis was timely and much needed, but it did mean that the more exquisite objects faded from view. It is as if the new anthropological outlook didn’t quite know what to do with ‘art’.

Despite this shift in the field, art history never completely disappeared. And one outstanding recent contribution is Jean-Claude Poursat’s L’art égéen, the first volume published in 2008 and the second in 2014. It is a major achievement that unfortunately does not have the exposure it deserves in the anglophone world – which is why I am working on an English translation, also with Cambridge University Press. M. Poursat brings an extraordinary eye and range in his approach that navigates prudently between art history and archaeology; his project has an encyclopedic range that few could match. The objective in my new book featured here is different – it seeks to bring some novel perspectives inspired by theory drawn from art, archaeology, and anthropology. Using the fabulous Aegean material as a stimulus, I aim to provoke reflection about art processes more generally. This is why I work with a series of themes that I think really resonate in the art of the Aegean Bronze Age, while also being quite significant in other periods and places too. The processes or ‘praxeologies’ I have developed are modeling, imprinting, combining, containing, and fragmenting. With modeling, for example, I think through the ways in which miniature architecture, figurines and vessels act as models for imagining the ineffable and intangible. For combining, I argue that it is not only chimerical iconography (e.g. griffins, sphinxes) that entails a creation of composition, but that a similar combinative process is seen when typical metal shapes are creatively rendered in clay or stone.

The approach I take is certainly not encyclopedic – but by putting objects together in novel ways my aim is to generate new insights, and contribute to a wider conversation now opening up on ancient art. While the general public seems always to have recognised the allure of Aegean Bronze Age art, contemporary scholarship still has much to draw from it as interdisciplinary discussions around visual and material culture push beyond existing boundaries. 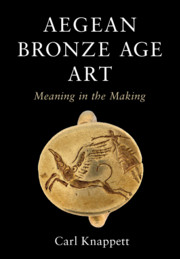