The Dark Side of Molecules: Politics and Chemistry in the 20th century

When trying to choose the science and the scientists that shaped the 20th century, many think about nuclear energy and the near mythical names of Maria Skłodowska-Curie, Max Planck, Niels Bohr, Albert Einstein, or perhaps about the revolution caused by molecular biology and the almost magical DNA and its 1953 discovery by James Watson and Francis Crick. More recently – especially after the publication of Rachel Carson’s Silent Spring (1962) – environmental concerns brought to the fore issues about toxics and pollution, but always as a dark science of our recent industrial development, and hardly presented as part of the great intellectual epics of the century. It is striking to note that chemistry as a profession seems not to fit in with the narratives of scientific progress of the 20th century.

Having a background as a chemist – before I moved to history and history of science – I have always felt uncomfortable with the marginal position of chemistry and the neglect of luminaries such as Gilbert N. Lewis and Linus Pauling, when compared with the great names of physics and biology. In addition, the biography of many still-unknown chemists was dramatically shaped by a turbulent age of extremes – as historian Eric Hobsbawm defined the 20th century – with two World Wars and the proliferation of non-democratic, even totalitarian regimes that caused terrible human suffering and widespread devastation. Perhaps chemist Fritz Haber is known for his controversial contribution to the making of chemical weapons in WWI, but many other remarkable scientists contributed to the synthesis of new molecules, such as dyes, drugs, plastics, and other artificial products, which have surely contributed to improving the everyday life of millions of people. However, they inevitably found themselves in different political regimes, from liberal democracies to dictatorships.

Being therefore concerned about the political role of chemists as makers of molecules in the 20th century, I focused my attention on a quite unknown community, Spanish chemists, on their international connections and the way in which their profession evolved and shaped their country. Through a detailed historical reconstruction, I discovered how chemists accepted cosmopolitan, republican, totalitarian, autarchic, technocratic and liberal values, and how their molecules were presented in public for different political purposes, depending on the kind of regime with which they collaborated. In a way, under a public rhetoric of objectivity, chemists as professionals took their side in every regime in which they lived, even in war, for instance, their reaction to the cruelties of the Spanish Civil War (1936-39) being particularly heart-breaking.

In appearance, my book tells the story of a single community and could be considered as another national history under the well-defined borders of a particular nation-state. However, every single biography of any Spanish chemist is closely linked to professional networks, international societies, student exchanges, cosmopolitan laboratories, and prestigious journals, and it therefore suddenly became a broader reflection on the way in which chemists ‘co-constructed’ different political regimes throughout the 20th century, and how, more or less consciously, in practice they became powerful ideological agents of their contemporary societies.

Under the banner of a rhetoric of neutrality, chemists often practiced a certain moral ambiguity when facing the dramatic ‘extremes’ of the century. Their ‘innocent’ molecules, which they produced masterfully in labs and industries, seem to have a dark side that historians should try to explore in greater depth and discuss in a more critical way. 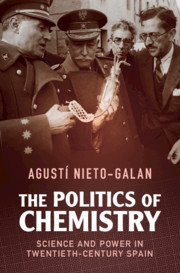 The Politics of Chemistry by Agustí Nieto-Galan

About the Author: Agustí Nieto-Galan