How the Big Apple Made the Georgia Peach 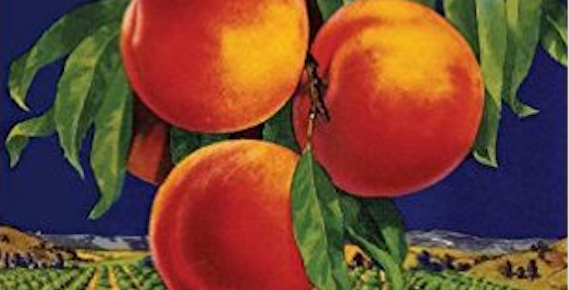 One of the things that surprised me as I conducted research for The Georgia Peach is how unsouthern Georgia peaches are. Don’t get me wrong: Prunus persica has grown in southern soil that southerners sometimes owned, and many southerners have planted and pruned the trees and harvested the fruit. Samuel Henry Rumph, who released the Elberta peach and was one of the larger growers in the region in the late nineteenth century, was a southern boy “to the manor born” as his contemporaries liked to point out.

But the creation of the Georgia peach as a commercial crop and a cultural icon depended upon economic and cultural connections beyond the South, in at least three ways. First, the fruit was culturally exotic. Although widespread in the Southeast since the early seventeenth century, the peach’s origins in Asia, along with its long history of genteel cultivation in Europe, imbued the fruit with associations simultaneously foreign and sophisticated in the late nineteenth and early twentieth centuries. This played well at a moment when, as historian Kristin Hoganson has written, Americans were obsessed with all things “oriental,” at the same time that Baltimore journalist H.L. Mencken was dismissing the Deep South as “that stupendous region of worn-out farms, shoddy cities and paralyzed cerebrums.” Second, the industry expanded rapidly around the turn of the century – from about 27,000 acres to almost 150,000 acres – in good part because of northerners like J.H. Hale of Connecticut, who invested heavily in southern orchards.

But cultural connotations and northern capital would have meant little if average people had not wanted to eat the fruit, and if a market network had not been able to distribute it to those eager consumers. In the late nineteenth and early twentieth centuries, when the reputation of the “Georgia peach” was cemented, New York City was the nerve center of that market network.

In part, New York City’s role was a simple function of demographics. At 3.4 million inhabitants in 1900, the city was more populous than the second and third-ranked cities combined (Chicago and Philadelphia, respectively). But New York City was also the principal eastern hub of the perishable food distribution network. Early commercial peach growers from Georgia made fabulous profits, and they frequently did so by working personally with produce wholesalers and commission merchants in the city. The merchants and agents, in turn, were able to sell Georgia peaches to a long-established market for the fruit – supplied through most of the nineteenth century by growers in the famous Delmarva peninsula, along with Maryland and Delaware proper – because southern fruit arrived in the city a full month before mid-Atlantic production began. And for an early-twentieth-century New Yorker, peaches were the first large fruits of the season, signaling the arrival of summertime abundance. How pleasant if that abundance could begin in late May instead of mid-July?

In the early twentieth century, peaches were the most perishable of the major fruits. In 1940, a the New York City division of the Works Progress Administration’s Federal Writers Project found that New Yorkers consumed more that 500 million pounds of peaches, mostly in May, June, and July. This extreme seasonality was part of the peach’s special allure. Apples, the nation’s most widely grown tree fruit, stored well and could be eaten almost year round. Peaches, as one writer put it in 1948, “are ready today, today, today, and tomorrow they will be past ready.” This perishability, as you might imagine, also perplexed the fruit’s distributors. As I detail in chapter five, “Rot and Glut,” Georgia growers and their allies made a valiant effort to coordinate the fruit’s distribution, but ultimately solved the problem of market gluts by simply growing fewer peaches.

The Big Apple in other words, had a hand in making the Georgia peach: the half century or so when Georgia peaches dominated the early season fruit markets of New York was enough to make the “Georgia peach” a household name. And even in the midst of today’s “permanent global summertime”, peaches remain essentially a seasonal good.

So eat a peach from the southern hemisphere this winter, if you must, and imagine the texture and flavor that distance and refrigeration have drained away. And look forward to the ephemeral summertime that made, and still makes, the Georgia peach.

About the Author: William Thomas Okie

William Thomas Okie is Assistant Professor at Kennesaw State University, where he teaches American history, food history, and history education. Trained in environmental and agricultural history at the University of Georgia, he has produced work that has won prizes from the Society of American Historians, the Southern Historical Association, and th...