The Tip of the Witch’s Nose

David Collins, editor of The Cambridge History of Magic and Witchcraft in the West, examines Jacob Cornelisz's classic painting "Saul and the Witch of Endor" to illustrate what magic and witchcraft have come to mean in the Western world.

At the center of the sixteenth-century painting, a witch sits on her throne of owls. A child satyr holds a book of spells from which the witch reads as she draws a magic circle around herself. Three maidens and a crone hunch over a goat casting spells of their own. The story unfolds in tableaus surrounding this central scene: Saul the Israelite king approaches the witch to ask her to conjure the spirit of his deceased advisor Samuel, Saul’s army awaits with trepidation an enemy army of unknown size, Samuel arises from the grave only to remonstrate Saul for the audacity of conjuring him, and Saul’s army suffers appalling defeat. In the painting’s right, unleashed by the spell casting of the witches, the powers of hell fly into the scene: a voluptuous maiden riding a carriage of skulls drawn by a two-headed rooster; a broom-riding hag casting balls of fire from the sky; a horde of monstrous beings – part fowl, part insect – swooping downward, leaving a wake that topples a fleet of caravels. 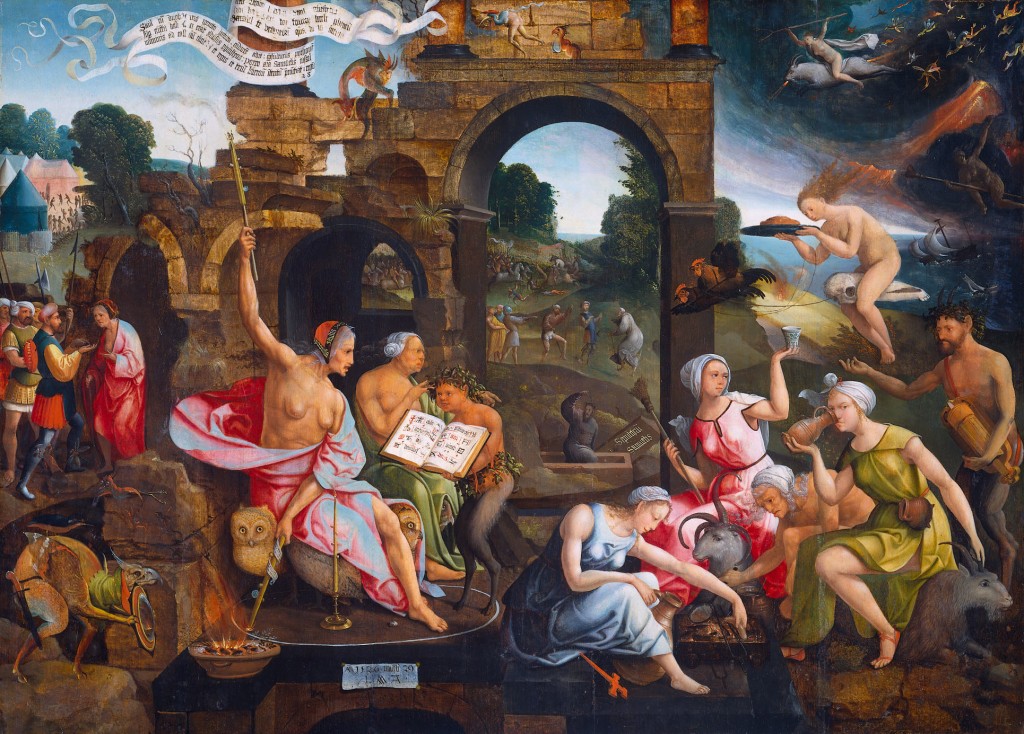 Jacob Cornelisz’s vivid, imaginative depiction of the story of the Witch of Endor captures the history of magic in the West in multiple respects. The story is ancient and biblical, at least two and a half millennia old. It emerged from a Semitic culture and was preserved in its holiest of books. For that Semitic culture, the story served as a moving exhortation to trust God and shun human connivances at learning the future. But the story was not just of significance to Ancient Israel. At a second level, then we see the results of Christianity’s spread and its adoption of the Hebrew Scriptures as its own with the result that the book and the story of the Witch of Endor was disseminated through subsequent millennia and beyond the Mediterranean world to Europe and the world. Generations of Christians examined the story of the Witch of Endor through their own interpretive lenses, and it became a touch stone for discerning the right and wrong of prophesy, conjuration, and demonic invocation. Hundreds of masterpieces of western art attest to the biblical pericope’s broader significance, even to the present day and among the post-Christian. Finally, the particular painting reminds us of a specific moment in the history of the West’s reflection on magic, a moment riven with concern that demonic powers were afoot in the world and impeding Christian society’s promised progress to fulfillment. The conflict was, in the minds of many, becoming especially pitch in the early modern period; and a consensus was building that all levers of power, secular and religious, needed to be employed in resistance.

So much of what magic has meant in the West is encapsulated in this painting and its multiple layers of significance: From antiquity to the present, from the ancient near east to twentieth-century America, from simple charms to demonic conspiracies. Magic has shaped and been shaped by religion, science, and the law; its ideas have been picked up and passed along; it has reflected and shaped so many of society’s deepest yearnings and darkest fears. This is the history that The Cambridge History of Magic and Witchcraft in the West: From the Present to Antiquity aims to unpack, expand, and illuminate. The story of the Witch of Endor is just the tip of the witch’s nose.

About the Author: David Collins

David Collins is the editor of The Cambridge History of Magic and Witchcraft in the West....