A Walk Through Venice

Whether it’s your first time to Venice or your tenth, it’s hard not to start with a visit to Saint Mark’s Square—for centuries the heart of the floating city. The square is filled with visual associations of  Mark the Evangelist, whose birthplace was the north African city of Alexandria.  The Venetians  pirated the saint’s body in 827 CE, cleverly hiding it in a basket of pork to avert Muslim custom officials. Under Saint Mark’s protection they braved the stormy seas back to Venice and laid his body to rest at the site of the present Basilica. Mark’s remains at once became a major attraction for Christian pilgrims and the city’s sacred benefactor.

As the basilica rose and Saint Mark’s Square became Venice’s political and religious center, the Venetians made efforts to make the saint feel at 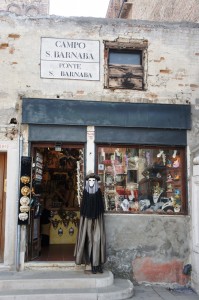 home by creating monumental art with Egyptian associations. Colorful mosaics with biblical stories from the Egyptian world fill the interior of the basilica, while the saint’s arrival in Venice is narrated through mosaics above the facade’s north door. The Basilica’s domes as well as the rooftop crenellations of the Ducal Palace recall the monumental architecture of Alexandria, Cairo, and Damascus. Fortunately, these borrowings from the Islamic world are easy to view without having to wait in long lines, but if you want to see the church relics, it will take time and effort (especially during the tourist season), for on any given day half the people touring Venice are crowded into Saint Mark’s Square.

For a brief respite, leave the frenzy of the square and wander to the “minor” parts of the city, as natives call them, where you can enjoy the jovial neighborhood campi and quiet alleyways.   Enjoy getting lost: There are marvelous things to discover away from the maddening crowd. As you roam the maze, see how many lions you can count on buildings and bridges as well as free-standing statues. The lion represented both Saint Mark the Evangelist and Venetian dominion over land and sea. You can also count the many representations of the Virgin Mary, once the protectress of the nobility’s bloodline and the Queen of Venetian Justice. 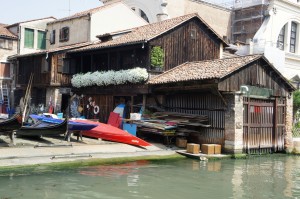 Want a bit of guidance on where to roam? Here is one possibility. Take the 52 motoscafo to the Zattere, the Venetian word for rafts, on the Giudecca canal.  As you debark make a note of Nico’s, which serves some of the best gelato in Venice. Whether a cone on the go or a leisurely stop at a cafe table offering a breath-taking window onto the Giudecca Canal, the flavorful ice cream will energize you. Facing Nico’s, take the quay along the secondary canal on the left, called the Fondamenta San Trovaso, to view the lovely squero, where gondolas are repaired and refurbished. Continue down the quay for another minute or two and you will see a crowded osteria (Venetian for tavern) called Schiavi. A favorite spot for both native habitués and visitors, Schiavi serves cecchetti (snack bites) and an enormous assortment of wines by the glass. There are also wines from all of Italy for sale.

Now you are entering some of the student quarters of the city. University departments are scattered throughout Venice, but this district, 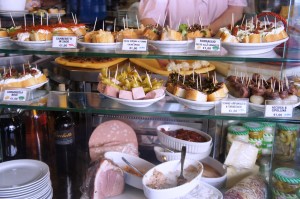 called Dorsoduro, houses languages and humanities. To continue, cross the bridge in front of Schiavi’s and walk down to the next major street that traverses the canal. Turn left and work your way west through a series of right angles, toward San Barnaba and San Tomà. Sound complicated? Just follow the crowd. University students fill many of the cafes in this district, where one usually does not have to pay an extra fee to sit and take refreshment. You will see many artisans working on furniture, masks, and jewelry.

At the Campo San Barnaba (a stone’s throw from the former church) is a tiny mask shop next to a small bridge, where Katherine Hepburn and Rossano Brazzi filmed Summertime (1955). Facing the mask shop do an about face, walk along the quay to the famous boat where venders sell fruits and vegetables. Stop for a picture and then take the bridge next to the boat. There you will see footsteps embedded in the pavement that mark the famous fistfights held to the delight of nobles and commoners during the Republic. 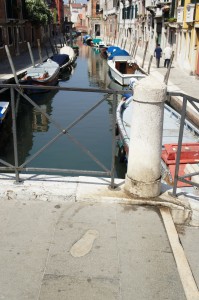 On the other side of the bridge is one of the Venetians’ favorite spots, Campo Santa Margarita. (Note:  there is only one Piazza in Venice, San Marco; all other squares are called campi, literally open fields.) There you will find outdoor cafes, pizza houses, and public benches where you can sit and watch the world at work and play. One of the biggest campi in Venice, children use C. Margarita as a playground and soccer field. Mornings it is filled with food stalls, where you can pick up snacks to go. I like it best in the early evening, when Venetians enjoy a spritz made with prosecco, Campari, and soda water. That’s the perfect prelude to a pizza at an outdoor cafe as twilight nears and the Venetian cityscape morphs into the starry night.