Unearthing the Archaeology of Measurement 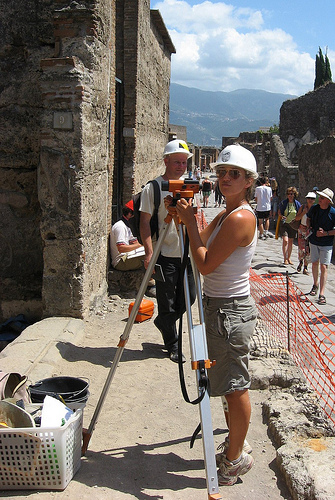 A Colleague of Laura’s in Pompeii

Once upon a time, I was an archaeologist. That’s right, I, Laura Evans, once dug up the pre-eruption layers of ancient Pompeii, sifted through soil and muck in coastal Connecticut, and removed cow patties from a site in the Alps where once a Roman legion camped.  For someone who loves the outdoors, archaeology is a great career. But in actuality, most archaeologists spend the majority of their time measuring, analyzing, researching, and looking for funds.

For archaeologists, understanding ancient measurements in their context world is just as important as understanding the Système international d’unités (aka the metric system) for us Yanks who use the United States customary system.  For example, Napoleon (who actually introduced the metric system) has a reputation for being short, when in actuality he was of average height. Confusion about his height resulted from the difference between the French pouce and British inch—2.71 and 2.54 cm respectively.  Anyway, the point being, archaeologists have a duty to understand the context and setting for systems and concepts of measurements. 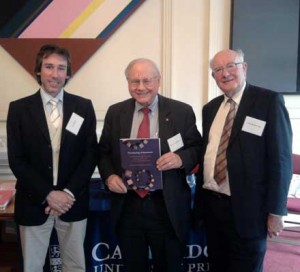 (L-R) Dr Iain Morley, Dr John Templeton (Templeton Foundation) and Lord Colin Renfrew with at the launch for The Archaeology of Measurement.

A new Press book that addresses measurements of the ancient world, The Archaeology of Measurement, edited by Dr Iain Morley and Lord Colin Renfrew (he’s like, a rock star in the field), was launched recently at the British Academy, London, at an event hosted jointly by the Press and the Templeton Foundation, a philanthropic research organization. Cambridge-based Marketing Executive Mark Ayling and publicist Gretchen Carroll organized the event.

The book examines how the advent of accurate measurement led to the discovery of time, space, the cosmos, and, ultimately, science and religion.  Khipu knots of the ancient Inca, Greek Bronze Age weight systems, and celestial city planning in Mesoamerica: all these played an important role in ancient cultures and have residual influences on our world today. Of course, many of the old measurements we see evidence for are no longer used.  Imagine doing math in Roman numerals, using multiple weight systems from large stones to tiny beads as points of reference, or working a ten day week in a 260 day years.

But had these ancient societies never attempted to standardize and record many actions and day to day activities with measurements, what would we know of them at all?  It makes me wonder what future societies will think of Americans’ concept of measurement and uniqueness in being only one of three nations (the others being Burma and Liberia) to not adopt the metric system.