The New Demand for Print… on Demand

In 2009, about 10% of Cambridge’s sales were generated by books printed on demand (POD) – a dramatic increase from five years ago. 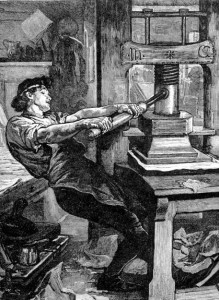 With the rising popularity of POD publishing, The Economist considers the impact of new technology on our industry. As the power of print becomes the power to press print, will POD prove a boon or a burden for publishing’s supply chain?

You might argue that Cambridge benefits from the new form. Our books are topical, subject-specific, and stand the test of time; with the changing tides of the news cycle, readers might find a book published five years ago of interest next month. And, though it breaks my heart to say it, publishing is ultimately a business, and sales and warehouse space can often dictate the lifeline of a book. This is no longer the case with POD – there is no such thing as “out of print.”

At the same time, POD has spurred on a surge of self-publishing. So are traditional publishers becoming the odd-men out?

While Kindles and iPads continue to (literally) change the face of publishing, POD offers yet another avenue of access to books. Does it prolong a book’s life and democratize knowledge? Are we opening the floodgates and loosening cultural controls?

Via The Economist: The boom in printing on demand: Just press print. New technology promises to prolong the life of the book.

ESPRESSO might seem an odd name for a bookmaking machine. But the wardrobe-sized apparatus at Blackwell, a bookstore in central London, and 30 other locations worldwide can print a paperback in about the time it takes to make and drink a shot of caffeine. A black-and-white printer produces the pages; a colour one the cover; they are then glued together by a third device which sits behind Plexiglas for passers-by to admire.

To some this is just “retail theatre”, a clever way to lure people into bookstores. But others view it as the logical step in a development that has picked up speed recently, yet has not received nearly as much attention as electronic readers or touch-screen tablets: the printing of books on demand, rather than on a publisher’s hunch.

About 6% of books in America are now printed on toner-based or inkjet machines—a rough proxy for print-on-demand (POD)—as opposed to on offset presses, estimates InterQuest, a market-research firm. Over the next five years, it predicts, this figure will increase to 15%. In 2008, the latest year for which data are available, about 285,000 titles were printed on demand or in short runs—132% more than in 2007 and for the first time more than in the conventional way. Amazon, the world’s biggest online bookseller, uses POD machines, although it does not reveal how often.

Keep reading at The Economist >>>