I’m Geraint Lewis and I’m a professor of astrophysics at the University of Sydney and I am the author with Luke Barnes of A Cosmic Revolutionaries Handbook (or: How to Overthrow the Big Bang)

What reader did you have in mind when you wrote the book?

GL: This book is for anyone who is interested in understanding how astronomers have come up with this picture of the Big Bang, this sort of universe that was born in a an amazing event 14 billion years ago and evolved into the sea of stars and galaxies we see around us today.

What do you hope readers will understand from reading the book?

GL: We hope that readers will take away from the book this idea that our picture of the Big Bang fact that we’ve got this evolving universe is the result of an awful lot of detective work and as observe in the universe over many centuries it’s a consistent it’s a coherent picture and it’s been built out of lots of bits of physical pieces being brought together so the Big Bang is not some sort of idea that somebody dreamt up one day but it’s the result of an awful lot of work an interpretation of the universe. So myself and my co-author Luke Barnes we give an awful lot of public talks. We talk about the universe, we talk about astronomy, we talk about cosmology and at the end of every talk that  e give people ask questions and there’s always somebody in the audience that says: ‘I have a different idea of how the universe behaves’ and to explain to them this entire story we have of why we have the Big Bang picture is too much to put into a question answer session at the end of a talk. So we’ve put it into a book instead.

Who approached who with the idea for this book? How did that discussion go?

GL: This book was born in just chats with my good colleague Luke Barnes and with other cosmologists that we know. Of course being in the field we know the story we know how the idea of the Big Bang grew over time, how the observations of the universe changed the way that we understood the universe behaved but there wasn’t really a source that we could point to that gave the, you know, the ‘dirty linen’ just what needs to be done to build up a theory of the universe. So we decided that we would write the book to tell that story.

Why do you think this is an important subject?

GL: The phrase the Big Bang it gets banded around a lot and, of course, it’s a title of a well-known sitcom etc. but the Big Bang Theory: the idea of the expanding universe is more than just a soundbite it’s a result of an awful lot of scientific investigation and for myself as a scientist I think that it is a very interesting story and I think for the outsider, I think, knowing that the Big Bang is just not a catchy title for a sitcom, it is a body of work built over more than a century with lots and lots of actors that took part and provided bits and pieces. I think it’s a very important story to understand how science itself works.

What was the most interesting experience that came from writing this book?

GL: The most interesting experience … I can relearn in the stuff that I thought I knew that there’s always, you know, when you when you do your science degree you come out you finish your degree and you think: ‘yes I know everything’ and then a few years ago by and you realize: ‘maybe I don’t’ and you go back and you look at you look in depth at the topic and there’s still things that surprised me today but you also look back at the history and the history which you thought was a nice simple progression and often, you know, there are particular individuals who are portrayed. It’s a messier thing, lots of people involved on a sort of different kinds of investigation so it taught me the course that science: is messy it’s not a simple one-way street.

Who are the scientific revolutionaries that you look up to most?

GL: Favorite scientific revolutionaries… I’m going to tread very carefully here as I mentioned I’ve looked into the history of science and the history of science is much messier than you ever really expected and often there’s an idea that science is driven by these lone geniuses. And that’s not the case anytime there’s somebody who was a giant, below that giant there are thousands of others working.

Of course the names Copernicus and Kepler and all those people and especially Isaac Newton, that put us on this path to modern cosmology, we can’t look beyond their contributions. More recent… one of my scientific heroes is: Fred Hoyle, the cosmologists from the 20th century, lots of things he didn’t get quite right but the things that he did get right he completely changed our understanding of the universe, how stars evolved and changed and what goes on in there.

He did some very beautiful work and I what I really liked about him, of course, is that he was a risk-taker, right, he was willing to push at the edge of science… The bit you get right you get the fame for on the bits you get wrong you get derided, right, but at least he tried that and he pushed on those doors. So he is one of, still, one of my heroes.

Did you learn anything unexpected in the process of writing this book?

GL: I guess the most unexpected thing that I learned when I was preparing the material for this book is that there is an entire alternative culture of cosmology going on out there. There are people that discuss cosmology and discuss the universe who are not academics, and they have their own ideas and they don’t interact with the academic community, and they’re often the ones that get very angry with us talking about the big bang idea. I was surprised to see just how big that community is and I would hope that some of them read this book to understand why we say what we do about the universe. 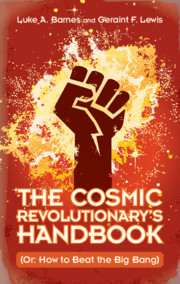