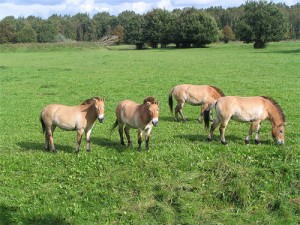 Before we trace the role of the domesticated horse (Equus caballus) from antiquity into the modern era, let us pause briefly to examine the plight of the wild horse (Equus ferus).In the Americas wild equids became extinct c 7000 BC.Everywhere in the Old World, increasingly intensive land use by man forced other equids – the Asian ass, African ass and zebras – into peripheral habitats outside their ancestral range, where survival was precarious.As we have seen in Europe, the wild horse was hunted out during the Mesolithic, persisting only in small pockets in eastern areas, where tarpans were reported in the Middle Ages.On the Asian steppes, the wild horse may have fared better, for it was documented in eighteenth-century Mongolia that hundreds were killed in an imperial hunt by the Manchus.Under the czars, Polish geographer Colonel Nikolai Przewalskiobtained the hide and skull of a wild horse from a Kirghiz nomad. In 1881 in St. Petersburg this horse was accorded the formal name Equus ferus przewalskii.This incident attracted the attention of other European zoologists who organized further expeditions to the Altai regions.

By the nineteenth century, however the numbers of Asian horses in the wild had dramatically decreased. The horse band comprises perhaps a dozen animals and is protected in the rear by the dominant stallion, which will attack any pursuer (as the author discovered much to her dismay, when attempting to take photographs in Uzbekistan). Once 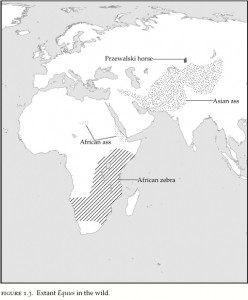 spotted, the animals disappear like a windstorm. The only viable approach was to separate the young foals from the family band, which often entailed shooting many juvenile and adult animals. The captured foals fared little better; close to 50 percent of them died en route to European zoos.During the Bolshevik revolution, the captive wild horse population in Russia was significantly diminished, although not before Baron Friedrich von Falz-Fein, a rancher in the Ukraine, successfully trained an imported wild stallion to be ridden. Later, the cataclysm of World War II would obliterate many other Przewalski horses across Europe.

Unfortunately, the initial breeding of Przewalskiwild horses in isolated zoos was marked by consanguineous (same-bloodline) matings that reduced the fitness of succeeding generations.But in post-war years, propagation in captivity became more systematically organized due to a comprehensive program of international exchange and outcrossing of animals.Success was such that by 1990 in 33 countries across the world, the population of captive wild horses had reached a total of 961.

But while progress had been made in the zoos, not all was well in the wild. As pastoralism and predation intensified, the rapid-fire modern rifle reached even the remotest regions, where it allowed hunters to annihilate an entire band of wild horses in short shrift.But with a burgeoning international zoo population, it now became feasible to reintroduce zoo animals back to their historic range on the Asian steppes.To ensure the transfer of a heterozygotic gene pool from captivity to steppe, a broad selection of relatively unrelated individuals was recruited.Nowhere were these horses received with greater pride and excitement than in Mongolia, for there the wild horse features prominently in traditional Mongol songs and poetry. Local nomads served enthusiastically as scouts to monitor the horses’ progress.Today, as the world population of captive wild horses soars well past 1,000, similar reserves for preservation of the species Equus ferus przewalskii have been established in many other countries.

Next week: The Mobile Culture of the Steppe Nomad >>