While we’re on birthdays…

Saturday saw celebrations of Cambridge University’s 800th year. At the centerpiece of the celebrations – a very cool looking light show projected onto the Senate House. 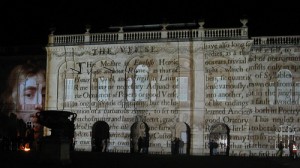 But isn’t the founding charter was from 1291? Yes, however, in 1209, communities of scholars were first established in Cambridge, then a former Roman trading post. The BBC broadcast a segment with video of the light show. Meanwhile, bells rang around the world, including here in NYC.

Here at the Press we’re working on 425, also this year.