Daddy! I wanna go on the boat! 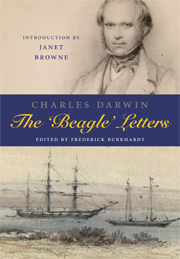 The fateful decision is made September 1: Charles Darwin will indeed sail on the Beagle.

Here’s some back-and-forth between Charles, his father, and Francis Beaufort, British Royal Navy Captain and hydrographer. Beaufort approved Darwin for the voyage, and his Wikipedia entry alone is testament to how interesting a figure he is.

Darwin writes his dad Robert Waring Darwin, begging (this is not the first time he’s pressed the issue) to be allowed to go. He’s right out of Cambridge, by the way.

He’s got his uncle’s responses to Dad’s concerns enclosed in the letter. This uncle, Josiah Wedgwood, would later be his father-in-law.

My dear Father
I am afraid I am going to make you again very uncomfortable.— But upon consideration, I think you will excuse me once again stating my opinions on the offer of the Voyage.— My excuse & reason is, is the different way all the Wedgwoods view the subject from what you & my sisters do.—

I have given Uncle Jos, what I fervently trust is an accurate & full list of your objections, & he is kind enough to give his opinion on all.— The list & his answers will be enclosed.—But may I beg of you one favor. it will be doing me the greatest kindness, if you will send me a decided answer, yes or no.— If the latter, I should be most ungrateful if I did not implicitly yield to your better judgement & to the kindest indulgence which you have shown me all through my life.— …

After the jump: the reasons that Daddy Darwin was reluctant to allow Charles to go.

Getting Dad’s approval, he writes to Beaufort right away.

Sir
I take the liberty of writing to you according to Mr. Peacocks desire to acquaint you with my acceptance of the offer of going with Capt Fitzroy. Perhaps you may have received a letter from Mr. Peacock, stating my refusal; this was owing to my Father not at first approving of the plan, since which time he has reconsidered the subject: & has given his consent & therefore if the appointment is not already filled up,—I shall be very happy to have the honor of accepting it.— There has been some delay owing to my being in Wales, when the letter arrived.— I set out for Cambridge tomorrow morning, to see Professor Henslow: & from thence will proceed immediately to London.—

“Immediately to London” indeed. Charles jumped on this one. So quickly, in fact, he didn’t really tell his girlfriend when he was leaving. She was peeved.

My dear Sir
I believe my friend Mr Peacock of Triny College Cambe has succeeded in getting a “Savant” for you— A Mr Darwin grandson of the well known philosopher and poet—full of zeal and enterprize and having contemplated a voyage on his own account to S. America

It all happened 177 years ago this weekend. Raise a toast to the Beagle this weekend at your barbecue.