On August 7, 1832, in Montevideo, Charles Darwin is packing heat.

He’s getting grizzled, turning into a rough and tumble explorer. Two weeks earlier he writes:

“our beards are all sprouting.— my face at presents looks of about the same tint as a half washed chimney sweeper.— With my pistols in my belt & geological hammer in hand, shall I not look like a grand barbarian?”

Try saying that last sentence out loud, but with a Stewie Griffin accent.

We’re having fun with that around the office today. 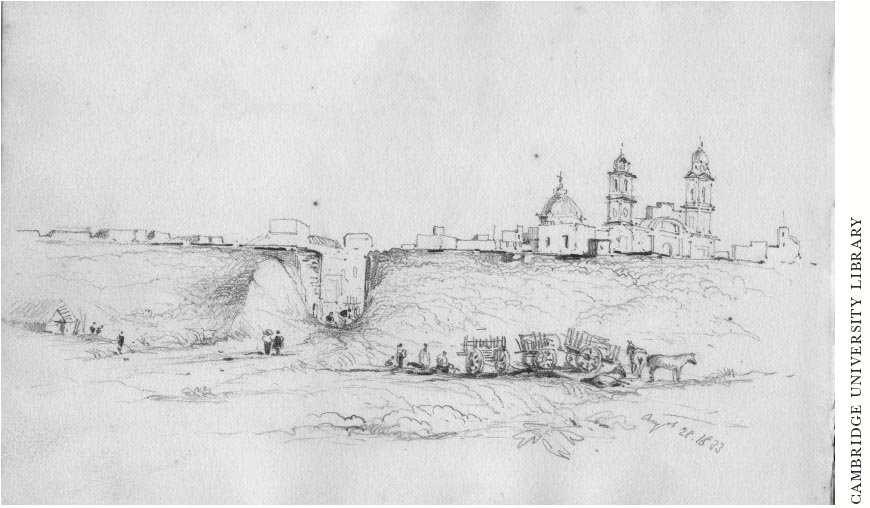 Outside the Walls of Montevideo, August, 1833

Someone needs to make a movie about Darwin’s Beagle voyage, and make Chas a real sex object. The past few weeks I’ve run letters full of goofy youthful gross-out and hilarious, sarcastic scorned love. You can find those in the Darwin Letter Friday Category link at right.

Here is today’s letter, full of adventure and explosions, after the jump:

“Monte Video | August 7th.—I have procured my letter again in order to write some more.— We run up to Buenos Ayres, where a Guard Ship fired a shot close to us. This we took up as a great insult, & if our guns had been ready we should have returned it with interest.— We immediately made sail & returned here.— The Captain reported the circumstance to the frigate Druid lying at the Mount, & she has gone up to Buenos Ayres & obtained ample satisfaction for the insult offered to us.—: Quarantine for the cholera was the excuse!.—

“We all thought we should at last be able to spend a quiet week, but alas the very morning after anchoring, a serious mutiny in some black troops endangered the safety of the town.— We immediately armed & manned all our boats, & at the request of the inhabitants, occupied the principal fort.—3 It was something new to me to walk with Pistols & Cutlass through the streets of a Town.— It has all ended in smoke But the consequence is very disagreeable to us, since from the troubled state of country we cannot walk in the country.— The Packet will not sail yet for a week.— And now for a bit of business, in my letter to Erasmus, I tell him Lieut: Blanchard will transact the shipping of my Box.— We have just heard the news he has broke & gone to America.—I hope Erasmus enquired at the London agent.—Mrs Palsgrave No 3, Lyons Inn, Strand. If so he will have heard of this. If not a letter had better be sent to Falmouth I trust they are not lost.— What a loss it will be to me.— If they are regained there must be some means of forwarding them to M Video.— I am very sorry for all this trouble.—
| Yours affectionately.— | Chas Darwin
On the 17th we start for the Rio Negro.—Adieu.—”

This letter comes from “The Beagle Letters”

That’s right. Don’t fire on the Beagle. If they had their guns ready, they would have messed that guard ship up! Instead they got a frigate on the case.

And patrolling against mutinous troops? Dang.

What the letter doesn’t say is that Charles turns in early — he had a headache.