Swedish ships plowed the seas around the Cape of Good Hope to India and China. Cows, with sea legs, which provided milk on board, sometimes made the crossing a remarkable number of times. Perhaps the most famous person who travelled to China from Sweden in the English speaking world was the architect William Chambers (1726-96), a native of Gothenburg but of Scottish parentage, who was knighted by the Swedish king in 1755. 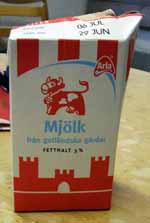 His journey to Canton opened his eyes to the glories Chinese gardens and architecture, leading to his seminal work, Designs of Chinese Buildings, in 1757. The pagoda at Kew Garden, on the outskirts of London remains a monument to this voyage. Not eveyone, however, was enthusiastic about the burgeoning new economic and cultural ties with China: Carl von Linné, the so-called Father of Botany, thought it was undermining native Swedish industry and culture and many Swedish priests lamented the taste for luxury goods its seemed to whet.