The Magnetic Attraction of William Gilbert, pioneer of geomagnetism 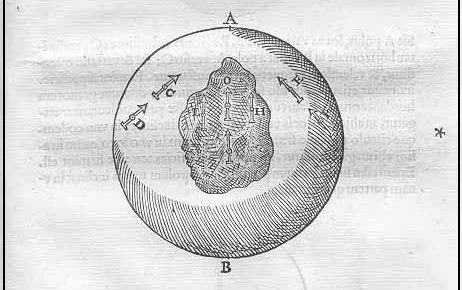 In this blog on the history of discovering the science of the Earth as a physical object I begin in antiquity with the philosopher Eratosthenes of Cyrene (276–194 BCE). He became first enquirer to arrive at a truly spectacular evidence-based result in Earth science: an estimate of the size of the Earth. An all-round scholar, skilled in arithmetic, geometry and astronomy, he settled in Alexandria on the invitation of Ptolemy III about 245 BCE. Five years later he had secured the most prestigious academic position in the ancient world: Director of the Library of Alexandria.

Eratosthenes made a surprisingly accurate calculation of Earth’s circumference using a geometrical method. Knowing that on a midsummer’s day the Sun is directly overhead at Syene (today Aswan) in Upper Egypt, he measured the size of the small shadow cast at noon by a vertical stick (or gnomon) in his home city of Alexandria. The shadow’s length revealed the difference between the angular distance between the two cities: it was one-fiftieth of a complete circle (7.2°). The distance along the major trade route between the two cities was already known: multiplying it by 50 yielded the Earth’s circumference, to within a few percent of the modern value.

Almost two millennia later, rational understanding of the nature of Earth’s interior began with William Gilbert (1544–1603). A skilled experimentalist, he made the first advances on understanding of the properties of the magnet and magnetic fields. Gilbert used spherical loadstones and explored how tiny magnetic needles, free to turn, set themselves at different points on such a stone. Gilbert concluded that the solid Earth is a giant magnet. Through his treatise, De re magnete, published in Latin in 1600, Gilbert became the founder of the new field of terrestrial magnetism. In this book, he advised that natural philosophers should “look for knowledge not in books but in things themselves,” by conducting experiments as he had done.

In 1601 Gilbert was appointed a court physician by Queen Elizabeth, during whose long reign, Britain became a major seafaring nation, trading internationally from ports in London and the Thames Estuary. Elizabeth chartered a powerful group of London merchants to form the East India Company for promoting England’s trading links with East Asia. To assist with long-haul navigation, sailors relied on the mariner’s compass, in which a horizontal magnetic needle swings on a vertical pivot. As an aid to exploring Earth’s magnetic interior, Gilbert sought out experienced navigators in the ports, learning much from their practical experience of using lodestones and compass needles at sea.

Legacy William Gilbert’s demonstration that Earth is an enormous magnet is one of the first great works of experimental physics.

About the Author: Simon Mitton