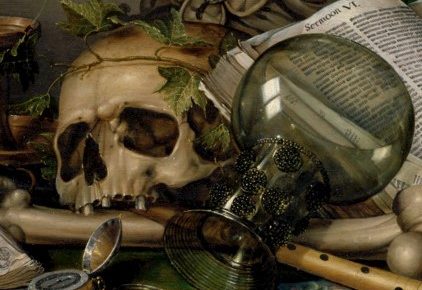 “To steal a Hint was never known,
But what he writ was all his own.”
– Verses on the Death of Dr Swift, D.S.P.D.

Part way through his most famous self-elegy, Jonathan Swift delivers one of the greatest one-line gags in poetry: ‘what he writ was all his own’. The ostensibly proprietorial phrase was brazenly lifted from John Denham’s On Mr Abraham Cowley:

To him no Author was unknown,
Yet what he wrote was all his own.

Denham praises Cowley for writing original verse under the appropriate influence of prominent models old and new. In Swift’s poem, more than half a century later, the venerable art of imitation (imitatio veterum) had been displaced by the dubious threat of theft (stealing hints). What does it mean to steal a hint? A hint can be gifted and regifted among likeminded writers. Swift gave John Gay the idea for The Beggar’s Opera, after all. But hints can be hijacked by hacks, as Pope affirms in the first book of the Dunciad: ‘How hints, like spawn, scarce quick in embryo lie; / How new-born nonsense first is taught to cry’.

Swift’s joke gains extra heft because he does not make the claim directly. He quotes from a made-up conversation among friends and rivals who have gathered for a hypothetical wake (‘Suppose me dead’, he asks us, somewhat brusquely). Swift puts the borrowed line into the mouth of an unlikely commentator (‘One quite indiﬀ ’rent in the Cause, / My Character impartial draws’): ‘As for his Works in Verse and Prose’, he concedes, ‘I own my self no Judge of those’. It is the ignorant critic who plagiarises Denham, merely in words if not in ideation, but he is unnamed (and ﬁctional) and therefore not liable. A short while before publishing Verses, Swift made a similar if more earnest observation about his refusal to steal hints. In the ‘Advertisement’ to the ﬁrst oﬃcial edition of his Works, in 1735, speaking in the third person, he declares ‘the author never was known either in verse or prose to borrow any thought, simile, epithet, or particular manner of style’. Such a claim is ironised by the editorial glosses in which the sources of just some of Swift’s hints are cited. Borrowing, not stealing, is his preferred description. What is the diﬀerence, materially speaking? The author never was known – is that a baiting confession?

At the start of his career, Swift mimicked Cowley’s Pindaric odes. Garth’s The Dispensary and Butler’s Hudibras were early favourites. Later on, he arbitrarily pastiched Paradise Lost. Dryden’s translations were frequently alluded to, often for bathetic eﬀect. Pope’s Dunciad, a text Swift claimed to have read at least a dozen times, exerted a strong inﬂuence over his Market Hill period in the late 1720s. Unlike Dryden, Swift did not produce a complete translation of a classical poem. Rather, he snatched parts of Horace’s odes and epistles and reworked bits of Ovid’s Metamorphoses. He freely spliced genres and forms, including everything from panegyric to pastoral, epistle to fable. Over many decades, Swift often turned to Virgil, Ovid and Horace for stories, characters and even metaphors. Really, another of Denham’s lines for Cowley is more appropriate: ‘To him no Author was unknown’. Adept with the colloquial styles of Skelton and Butler, the panegyrical methods of Cowley and Marvell, the epic scope of Milton and the comic subversions of Prior and Pope, among other things, Swift was an adaptive and adaptative poet.

About the Author: Daniel Cook

Dr Daniel Cook is the Head of English and a Senior Lecturer at the University of Dundee. He is the author and editor of numerous books on eighteenth- and nineteenth-century British and Irish literature, including a forthcoming edition of Gulliver's Travels and (with Nick Seager) The Cambridge Companion to Gulliver's Travels. After completing his Ph...