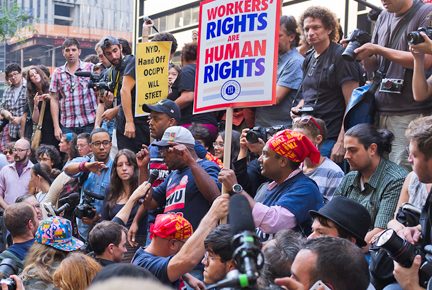 Countries around the world are struggling with the economic repercussions of the pandemic, and the United States in particular has recorded levels of unemployment not seen since the Great Depression. While the CARES Act, passed by Congress and signed by President Trump in March, provided $600/week in supplemental income to some workers, this benefit lapsed at the end of July and no replacement program has been enacted, leaving millions in a state of housing and food insecurity. At the same time, states have made cuts or are considering steep cuts to Medicaid and other social safety programs precisely as need surges, with millions of Americans losing health insurance along with their jobs. A disproportionate number of those who are at risk are Black Americans and people of color who worked—or still work, in some cases, but at minimum wage—in industries without organized labor, which has also been in decline over the past several decades in the United States. Indeed, the precarious position of low-wage workers and the unemployed stands in contrast to legislation designed to protect businesses and employers—for example, a $25 billion bailout to the airline industry, or the GOP Liability Shield Bill, which would give employers sweeping immunity against Covid-19 related lawsuits brought by employees.

We spoke to several Cambridge University Press authors and editors about the legal, political, and historical factors that explain these converging crises and make low-income and unemployed Americans especially vulnerable. We also asked about connections between calls to end anti-Black racism and to reinvigorate organized labor, and, more generally, how anti-labor and anti-poor measures have exacerbated the systemic effects of racism.

Cecelia Cancellaro (CC): My author Nate Holdren (Injury Impoverished: Workplace Accidents, Capitalism and Law in the Progressive Era), talked to me about the legal and historical aspects of the dangers that workers face today, particularly in light of Covid-19. “With the Covid-19 pandemic, many people face the stark choice between the risk of infection at work or the certainty of financial loss. This situation weighs especially heavily on millions of low- income people, many of whom are racialized minorities. People of color tend to work in jobs with higher chances of Covid-19 exposure, are paid worse, and have less access to resources when they become injured or disabled. The distribution of vulnerability and harm during the pandemic follows enduring patterns of power and inequality.

“Workplace injury and death have often been naturalized through the assumption that economies must kill, unavoidably. That assumption treats the economy as fixed and given, rather than a set of political power relationships that could remade. That assumption also encourages us to see employee injuries and death as merely unfortunate, rather than human tragedies–all the more tragic because avoidable. During the pandemic, some politicians and pundits have said loudly and clearly that the economy requires danger and that harms are acceptable, often tied to the euphemistic term “re-opening” the economy. That this policy choice is politically acceptable to anyone today, even though it will kill and disable many, particularly many people of color, is a troubling reality.

“I believe that working class people’s best hopes lie in the kinds of protest and dissent that arose in the aftermath of George Floyd’s murder. The Black Lives Matter movement has politicized police violence at the level of ideas and challenged that political violence through brave collective action. Unless the harms of Covid-19 and employee injury more broadly are similarly politicized and collectively opposed, people will continue to be injured and killed at work. Adding insult to injury, those harms will be treated by the powerful in society as merely unfortunate, rather than unjust, political, and violent.”

Sara Doskow (SD): A growing body of political science research shows that the ultra-rich receive disproportionate representation from government, but how do the poor fair as a distinct constituency separate from the rest of the 99%?  In her award-winning book Poor Representation, Kristina C. Miler tackles this question, analyzing data across three decades. She finds that the poor are grossly underrepresented by Congress, which spends only 1-2 percent of its time on poverty-related issues.

Says Miler, “Unfortunately, the dynamics that we are seeing today are consistent with how Congress has acted—or failed to act—for the poor in the past, even when poverty rates have been high. My research shows that members of Congress are not more active on poverty issues when they represent more poor constituents, and this fits with what we see today in terms of Congress not responding consistently to the increased number of Americans living in poverty due to the pandemic and subsequent economic crisis. The initial shock of the pandemic brought about the CARES Act, but the type of sustained work to keep the needs of the poor on the legislative agenda is much less common. Additionally, members of Congress are more likely to think about the constituents in their district who are active in contacting their office and who make financial contributions—behaviors that are much more likely to be taken by business and employers than by low-income Americans.”

“But this does not mean that no one in Congress ever champions the interests of the poor. A small subset of legislators, who are disproportionately Democratic women and Black representatives, are more likely to act for low-income Americans, especially when the interests of the poor overlap with their representation of women and people of color more generally. This may prove to be important in addressing the current crisis because Congress is more diverse than it has been in the past. Since many of the low-wage, essential jobs like grocery store employees and nursing home staff are held by women and people of color, it is more likely that female and Black legislators will advocate for them. In contrast, the rural poor are particularly unlikely to have their members of Congress act on their behalf, which could further hurt rural communities during this pandemic.”

Turning to local politics, the situation is also bleak. Hometown Inequality—a new book by Brian Schaffner, Jesse Rhodes, and Raymond La Raja—tracks racial and class inequalities in representation in local government across 500 communities from big cities to small towns. The findings are deeply troubling. With regard to race, the authors write, “We consistently found that local governments were most likely to enact policies consistent with their White residents’ ideologies. That’s true even where Whites are a minority.” They also note, “Although political inequality by race is widespread in our big cities, it is actually much worse in suburban and rural towns throughout America.” For more, check out a recent New York Times op-ed from the authors that draws on the book’s findings, as well as separate urgent research from Schaffner and Bennett Fleming-Wood on how Americans who have been hit hardest by the economic downturn are balancing dual worries about their health and finances.

Matt Gallaway (MG): I spoke to Richard Bales and Charlotte Garden, co-editors of The Cambridge Handbook of U.S. Labor Law for the Twenty-First Century, about how they see their work – and that of the contributing authors – shaping or reflecting the discourse around labor, poverty, and racism in the United States.

Richard Bales and Charlotte Garden: Several chapters in our handbook explicitly tie together issues of worker rights, racial justice, and workers’ bargaining power. In Make Labor Organizing a Civil Right, Richard D. Kahlenberg and Moshe Z. Marvit recognize that labor rights and civil rights have always been intertwined both conceptually and practically, and that progress on one is highly dependent on progress on the other. Michael Z. Green, in Union Commitment to Racial Diversity, argues that unions must become more strategic on matters of race given the increased racial diversity in the composition of all workplaces, such as by bargaining for creative contract terms that promote worker solidarity across race and class, and by joining with broader social movements such as Black Lives Matter. In Organizing for Workplace Rights When Immigration Law Discourages It, Leticia M. Saucedo demonstrates how immigration law actively discourages immigrant workers from unionizing in low-wage industries, and how changing these laws and enlisting the protection of state and local governments is critical to protecting the rights of all workers. Finally, in Union Rights for All: Toward Sectoral Bargaining in the United States, Kate Andrias proposes that collective bargaining be decoupled from individual workplaces and instead be permitted at the sectoral level — a practical proposal that would  address the gross disparity in bargaining power between employers and workers in the modern economy, and would give workers the ability to meaningfully bargain for what they most value — such as, in an era of Covid-19, their own health and safety.

MG: For an overview of how antitrust laws have weakened labor movements in the United States, I recommend a recent essay, “Taking Business Law Back from Economists: Building Worker Power Through Antitrust Reform,” by Catherine Fisk. In this piece, Fisk, who has also written a preface to Beyond the Algorithm: Qualitative Insights for Gig Work Regulation (edited by Deepa Das Acevedo, forthcoming from Cambridge University Press in January 2021), reviews the groundbreaking work of antitrust scholars Hiba Hafiz and Sanjukta Paul. Paul’s forthcoming book, Solidarity in the Shadows of Antitrust, will be published by CUP in the fall of 2021.

Cambridge Now is a series of blog posts exploring connections between scholarly research and ongoing calls for social justice. If you’ve enjoyed this post, please consider forwarding it to a friend or colleague.