The Afterlife of Shakespeare’s Sonnets

Lovers swoon at Shakespeare’s Sonnets – or so we’re told. That’s why lists proliferate of ‘Shakespeare’s Most Romantic Sonnets’, and why Valentine’s Day produces so many novelty pink-and-red volumes. But historically, the Sonnets have inspired a far more complicated set of emotions than love or desire, including frustration, contempt, and resentment, and their authenticity has been questioned for centuries. My new book, The Afterlife of Shakespeare’s Sonnets, seeks to reconsider some of our basic assumptions about the Sonnets, including their centrality to the Shakespeare canon.

When Shakespeare’s Sonnets was first published in 1609, it sank almost without trace, and the Sonnets would not be reprinted until 1640 when they were conflated, reordered, and given titles by John Benson. The preface to his Poems states that they are now (only now) made ‘serene, clear and elegantly plain’. For all of the seventeenth- and most of the eighteenth- century, the Sonnets were excluded from Shakespeare’s Works, and they maintained a reputation as ‘spurious’, ‘apocryphal’ and ‘obscure’.

Shakespeare’s most romantic lyrics were songs or extracts from the plays—such as speeches from Romeo and Juliet—or poems written by other people, like Christopher Marlowe. Only in the early nineteenth century, when the German critic August Wilhelm von Schlegel blamed the English for overlooking the Sonnets, given that they ‘paint most unequivocally the actual situation and sentiments of the poet’, did the Sonnets start to become ‘Shakespeare’.

A further contemporary misconception about the Sonnets is that the same lyrics have always been popular, but this is not the case. ‘Shall I compare thee to a summer’s day?’ was mysteriously omitted from Benson’s Poems, meaning that it was out of print for over a century. The poem was rescued by Victorian anthologists, in particular Francis Palgrave who entitled it ‘To His Love’ and made it the acceptable face of Shakespearean loving.

Another Sonnet familiar to us now, ‘My mistress’ eyes are nothing like the sun’ has prompted innumerable parodies, but for a long time it inspired little mirth. Rather than allow Shakespeare’s adultery to challenge ‘the general moral beauty of his character’, Nathan Drake concluded that this mistress must be a fiction. The ‘Dark Lady’ sequence was ‘intended to express, aloof from all individual application, the contrarieties, the inconsistencies, and the miseries of illicit love’. Following the Oscar Wilde trials, in which the Sonnets were called as evidence of so-called sexual deviance, the prospect of even such a mistress as this became preferable to the alluring figure of ‘Mr W. H.’, and this Sonnet’s familiarity would build across the twentieth century. But in doing so, it produced responses that are far from today’s genial parody. In his poem ‘Greater Love’, Wilfred Owen contrasts conventional heterosexual love with the passionate ties between soldiers during WW1. His contempt for conventional love poetry (and for women) finds expression through lines which seem to repudiate the Sonnet’s blazon (‘Coral is far more red than her lips’ red’) in favour of a bloodier comparison:  ‘Red lips are not so red/ As the stained stones kissed by the English dead …’

Even an enduringly popular Sonnet like 116, ‘Let me not to the marriage of true minds’, has inspired contradictory readings. When in 1866 Gerald Massey argued that it was written for the wedding of the Earl of Southampton and Elizabeth Vernon, Robert Bell remarked that ‘Mr. Massey could hardly have been more unfortunate had he picked out as an epithalamium one of the Sonnets on Death … There is absolutely nothing relating to marriage, or remotely suggestive of marriage, in the sonnet from beginning to end.’

My book argues that Shakespeare’s Sonnets have not always been ‘Shakespeare’, and that the selection we now celebrate, anthologise and quote from has altered considerably over the centuries. Rather than focus on an overarching narrative created by the ‘sequence’, it uncovers the fascinating history of individual Sonnets, and the creative responses they continue to inspire. When exploring Shakespeare’s Sonnets, love really is not love. 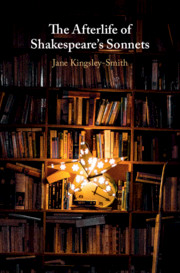 The Afterlife of Shakespeare’s Sonnets by Jane Kingsley-Smith

About the Author: Jane Kingsley-Smith

Jane Kingsley-Smith is a Reader at the Roehampton University, London. She is author of Shakespeare's Drama of Exile (2003) and Cupid in Early Modern Literature and Culture (Cambridge, 2010). Dr Kingsley-Smith has a Ph.D. from the Shakespeare Institute, Stratford-upon-Avon and is a regular lecturer at Shakespeare's Globe....