Shakespeare and War – the topic for Shakespeare Survey 72 – is nothing if not wide-ranging. From the significance of Tom Hiddleston’s unfeasibly tight armour in Thea Sharrock’s 2012 film of Henry V (thanks to Ramona Wray), to the deadly technological excesses of gunpowder development (Randall Martin), and the relations between Coriolanus and Homeland (Christina Wald), these articles unflinchingly, ‘look upon the hideous god of war’ (2 Henry IV 2.3.35). War is everywhere, even if, as Michael Hattaway discusses, actual battle scenes were less frequently staged in the early modern period than in modern reimaginings, and despite Eoin Price’s discussion of the relative marginality of Shakespeare’s plays during the Civil War.  The environmental and ethical costs of war resonate across the centuries like the PTSD memories and therapeutic Shakespeare performance explored by Ros King. Wartime performances – of Shakespearean cabaret (Irena R. Makaryk), of Ernst Lubitsch’s To Be Or Not To Be (Reiko Oya), and of Hamlet in the London of the Second World War (Zoltán Márkus) – attest to the contextual flexibility of the plays at times of conflict. Elisabetta Tarantino shows how romantic comedy might redraw the coordinates of religious wars; for Diana E. Henderson, #MeToo provides the lens for re-gendering war and its effects.

Each volume of Shakespeare Survey has its cluster of themed articles, as well as a selection of other essays. Highlights of volume 72 include Gabriel Egan’s essential and informative introduction to quantitative methods in textual studies, and Melissa Croteau’s timely analysis of Vishal Bhardwaj’s Kashmir Hamlet, Haider (2014). Important new contributions to the literature on character by Samuel Fallon, Ellena Pellone and David Schalkwyk join work on wordplay from Peter J. Smith and Lisa Hopkins. Sonya Freeman Loftis adds to the growing vital work on Shakespeare and autism, challenging some of the assumptions about healing and universality along the way.

The final component of a Survey volume is its reviews. Stephen Purcell and Paul Prescott cover English performances from London to Liverpool: landmark productions including Josie Rourke’s Donmar Measure for Measure and the first season at the York Rose get their judicious, informed assessments. James Shaw gives his annual listing of professional Shakespeare productions. Charlotte Scott, Peter Kirwan and Russell Jackson review the year’s publications.

As I take up the editorship of Shakespeare Survey, what I’m proudest of is the intellectual range and openness of the work we publish. Take a look at 72 – and, even better, think about submitting your work to us.  Volume 73 – on Shakespeare and the City – is on its way to press. Volume 74 has as its theme Shakespeare and Education (final submission September 2020) and 75 has ‘Othello’ (submission September 2021). I’d be delighted to hear from established and more junior scholars about possible submissions ([email protected]), all of which are anonymously reviewed by members of our Advisory Board. 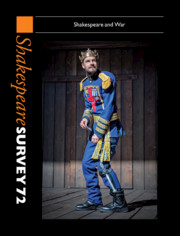 About the Author: Professor Emma Smith

Emma Smith is Director of English Studies at Hertford College, Oxford. She has a broad range of Shakespearean expertise, in terms of performance, criticism and the preparation of textual editions, and has written for students, theatregoers and scholars. Her list of publications includes a performance edition of King Henry V (Cambridge, 2002). She c...