How Much Confidence Should We Place In Scientific Claims?

What Is Special About Science?

James Zimring discusses the struggle of how to evaluate the claims of science in a world that demands an ever more rigorous consideration of how much confidence to put in such claims. Each of us is taught what science claims to be the case, but to what extent are we taught the basis for such claims – the strengths and pitfalls of science itself?

The importance of understanding the workings of science

Scientific advances and scientific knowledge have become an integral and inexorable part of modern life at a time where correct knowledge could not be more important.  We need to know if the Earth is getting progressively warmer and why, or else we can’t intervene to prevent disastrous climate change.   We must understand if vaccines actually cause autism, and if they do, how to remedy this.  There is wide consensus amongst scientists that the Earth is indeed getting warmer due to human causes and that vaccines do not cause Autism.  Some people find these claims compelling, others reject them out of hand, many don’t know entirely what to think.  To navigate this quagmire, we must understand what science is, how it works, what is the basis of scientific claims to knowledge and how much confidence we should put in such claims.

Science appears to be different from other types of knowledge

Given the centuries of consistent progress, scientific knowledge claims certainly appear special. Newton’s mechanics predict a vast array of physical phenomena.  Pasteur’s theories of immunity led to many vaccines that can prevent infectious disease.  Yet, scientists now tell us that the theories of Newton and Pasteur were both wrong.  This demonstrates what logicians have always known, because a theory works does not demonstrate it is “true”.  Yet, scientists seem to consistently tell us that this time they have got it right, and we can be confident that such really is the case, this time, since the newest truest theory predicts and explains nature in a way that the previous theories did not.  But that is exactly what proponents of the previous theory told us, and of the theory before that, and so on.

This is difficult to reconcile, and has been an area of fertile philosophical debate ( i.e. realism vs. anti-realism). If Einstein didn’t discover a fundamental truth about the universe with the theory of relativity, then why has essentially every weird prediction the theory has made now been observed.  Even global positioning systems would not work without accounting for relativity, and we would all still be screaming at each other during family road trips over why each of us was reading the crumpled map wrong – happily we are now free to scream about other things.

What is special about science?

Given that scientific claims have so frequently been wrong, one cannot support a view that science is factual, that it is not an opinion.  Yet, given the great power of science to predict and control nature, it seems equally absurd to view science as mere opinion, as any other fanciful notion just dreamed up on a whim.  Science is constrained by observation of the natural world through experience, but so are many other approaches to understanding the world.  As such, it has been held that it is the “scientific method” that distinguishes science.  However, there has never been a consensus amongst scientists, or those who study them, regarding what exactly the scientific method is.  That it has not yet been precisely defined through necessary and sufficient conditions does not mean it doesn’t exist or have a special character – but then what is it and how are we to understand it?  In my view, one can achieve such an understanding if one takes a broad perspective, not losing the forest for the trees, but the trees must nevertheless be examined to understand the forest.  The trees consist of advances from philosophy, psychology, history, sociology, and anthropology that must be woven into a holistic forest.  The scientific woodlands are different from other forests, and their thorough exploration is an essential journey.  Scientific illiteracy is not so much a failure to understand what scientists currently claim are the properties of the natural world; rather, it is a lack of understanding of the properties of science itself.  If we are to approach our assessment of specific claims as an informed populace, then we should turn more attention to our understanding of what science is and how it really works. 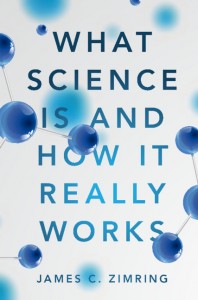 What Science Is and How It Really Works

For 20% discount, enter code: ZIMRING19 at the checkout: cambridge.org/zimring

‘We live in a world where the discoveries of well-done science are rapidly improving the lives of millions; but at the same time poorly done inquiry that fails to meet the foundational principles of science, even when carried out with all good intentions, can result in harmful false conclusions resulting in wasting of resources, bad results for individuals and bad public policy for nations. Dr Zimring has produced a marvelously cogent and eminently readable book that explains how to recognize good science and know when to question poor ‘scientific’ conclusions. Reading this book places scientists and non-scientists on the same playing field when discussing critical issues and making important decisions. I would feel much better going to the polls if every voter understood the lessons that Zimring effortlessly communicates.’ Brian R. Smith, Yale University, Connecticut

About the Author: James Zimring

James Zimring, Author of What Science is and How it Really Works provides a detailed explanation of the inner workings of science.  The book synthesizes a working definition of science and its properties, as explained through the eyes of a practicing scientist, by integrating advances from philosophy, psychology, history, sociology, and anthropolo...