My aim in editing and translating Dante’s Convivio (or “Banquet”) has been to make an edition that provides nonspecialist Dante enthusiasts and students with all they need to explore this work of Dante’s middle period, which he composed circa 1304–7, between his youthful work the Vita nova and his masterpiece the Divine Comedy.

To realize this aim I have made use of a vast amount of the available scholarship on Dante and the Convivio, much of it in Italian but translated or paraphrased by me in the notes so that readers who do not know Italian can benefit from these sources. The notes also provide pertinent quotations and citations of primary sources—for example, those of Aristotle or Thomas Aquinas—to contextualize and clarify Dante’s thought in the Convivio. My substantial introduction to the volume is divided into four sections—“The Convivio: A Portrait,” “Dante and Lady Philosophy,” “Dante’s Quest for Knowledge,” and “Dante and Nobility”—which will orient readers to the Convivio. In addition, there are two indexes for following up on items of interest, one index for my introduction and notes and one for the Convivio itself. The result is the first fully annotated and introduced translation of the Convivio to appear in English.

The text I followed for my translation is the most recent authoritative critical edition, published in 1995 by the Società Dantesca; in my notes I refer to textual variants in previous editions that will be of interest to readers who don’t have access to the Italian. This is the first time that an Anglophone translation of the Convivio is printed parallel to Dante’s original text, a feature that will give readers another means of drawing still closer to the content and language of the Convivio.

The treatise is called a “banquet” because Dante pictures it as a communal meal of knowledge; each book is a separate course in this banquet.

The Convivio is a kind of vernacular encyclopedia of the knowledge of Dante’s time; it touches on many areas of learning: philosophy, politics, linguistics, science, history, and other subjects, all of them treated with Dante’s characteristic inventiveness and power of insight. Dante writes that his original plan for the Convivio was to compose fifteen trattati, or books, including an initial prefatory book. Each of the fourteen principal books would begin with a canzone (a long poem), which would then be interpreted allegorically and used as a springboard for erudite reflection. The treatise is called a “banquet” because Dante pictures it as a communal meal of knowledge; each book is a separate course in this banquet. In the end, he composed only four of these books, the prefatory book and self-commentaries on three of his poems, abandoning this project most likely to dedicate himself to composing his great poem the Divine Comedy. 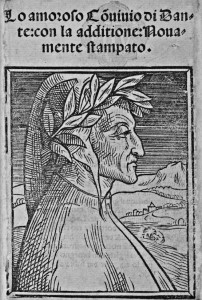 The prefatory book explains why a book like the Convivio is needed, why it is difficult or abstruse at times, and why Dante is writing it in the vernacular instead of Latin (the standard language of the time for such writings). Books II and III form a unit, both focusing on Dante’s new love after the death of Beatrice—his love for Philosophy, whom he personifies as “the most beautiful and dignified daughter of the Emperor of the universe.” Book IV, by far the longest of the Convivio, is noticeably different from the two books that precede it. The subject of this treatise, which is written in the form of a scholastic quaestio or systematic exploration of a specific question, is the nature of true nobility.

In sum, the Convivio presents rich areas of Dante’s thought, of great importance for an understanding of his work as a whole, especially the Divine Comedy; and this Cambridge University Press Dual-Language Critical Edition covers the extraordinary depth, complexity, and originality of the Convivio, in terms that are accessible to nonspecialists.

About the Author: Andrew Frisardi

Originally from Boston, Andrew Frisardi lives in Central Italy. His work as a writer, translator, and independent scholar has been awarded with a Fellowship from the Guggenheim Foundation, a Raiziss de Palchi Translation Award from the Academy of American Poets, and a Hawthornden Literary Fellowship. His edition of Dante's Vita nova, with translati...