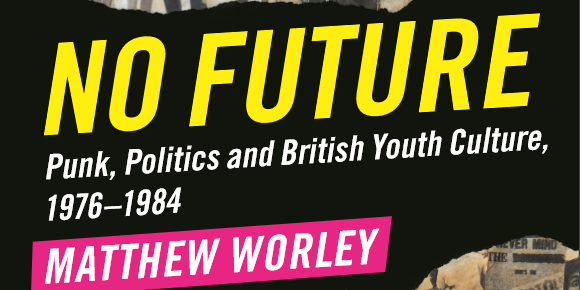 All this week on fifteeneightyfour we are celebrating the launch of No Future: Punk, Politics and British Youth Culture, 1976-1984 by Matt Worley with music, words, videos and giveaways. Forty years on from the release of the iconic debut album, 'Never Mind the Bollocks, Here's the Sex Pistols', No Future recaptures punk's anarchic force as a medium through which the frustrated and the disaffected could reject, revolt and re-invent. Keep checking this space throughout the week to hear more.

‘No Feelings’, ‘No Fun’, ‘No Future’. The years 1976–84 saw punk emerge and evolve as a fashion, a musical form, an attitude and an aesthetic. Against a backdrop of social fragmentation, violence, high unemployment and socio-economic change, punk rejuvenated and re-energised British youth culture, inserting marginal voices and political ideas into pop. Fanzines and independent labels flourished; an emphasis on doing it yourself enabled provincial scenes to form beyond London’s media glare. This was the period of Rock Against Racism and benefit gigs for the Campaign for Nuclear Disarmament and the striking miners. Matthew Worley charts the full spectrum of punk’s cultural development from the Sex Pistols, Buzzcocks and Slits through the post-punk of Joy Division, the industrial culture of Throbbing Gristle and onto the 1980s diaspora of anarcho-punk, Oi! and goth.

What they are saying about the book

‘No Future cuts through the stodgy crust of nostalgia, self-serving memoir and fan-boy facts that conceals punk and reveals the truth of youth culture in late Seventies / early Eighties Britain: the internecine battles fought over issues of sound and style were inextricably linked to the political conflicts and dilemmas of that era. Digging deep into the fanzine squabbles and music press controversies that raged across the punk community, Matthew Worley brings to keen life the urgency of a period that felt at once like an terrifying crisis-time and the dawn of a new epoch delirious with radical possibilities. Giving Anarcho and Oi! the serious attention they’ve long deserved, and analysing this tumultuous time through perspectives that range from anti-consumerist boredom and feminist personal politics to media-critique and dystopian dread, No Future is an essential read for punk scholars and punk fans alike.’ – Simon Reynolds, author of Rip It Up and Start Again: Postpunk 1978-84 and Shock and Awe: Glam Rock and Its Legacy

‘I’ve been involved with punk for most of my life but even for me it’s easy to forget how diverse the whole movement was. This book reminded me of how exciting and different it all was and how ‘real’ punk had nothing to do with the media’s myths. Look and learn my little droogs.’ – Steve Ignorant, former member of the band Crass

‘A clear and engaged account of a complex and vexed topic.’ – Jon Savage, author of England’s Dreaming 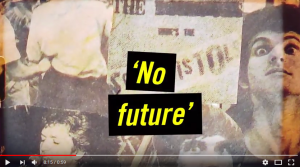 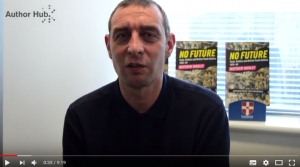