Marmots and the Importance of Life History

Written by: Kenneth B. Armitage

Marmots adapted to this harsh environment by increasing body size and hibernating from 6.5 to 8.5 months. Hibernation is a ‘keystone’ life-history trait that influences physiology, reproductive frequency, and population dynamics. Although large body size made possible increased hibernation efficiency and the effective use of the herbaceous vegetation characteristic of marmot habitats, it imposed costs on the frequency of reproduction and, in association with hibernation, required the evolution of sociality as the major life-history trait focused on reproductive success.

Sociality occurred when large body size did not allow a young marmot to reach maturity in its first summer because of time limitations imposed by the short active season and the need to prepare for hibernation. As a consequence, young are retained in their natal social groups for one or more additional growing seasons.

In yellow-bellied marmots, female young are preferentially retained to form female social groups consisting of closely-related kin, e.g., mothers, daughters, and sisters. But other species have different social systems; those of high sociality are characterized by the delay of dispersal and reproductive maturity to two or three years old.

The social systems are not obligate, but express various degrees of flexibility related to factors such as population density and annual demography. Both cooperative and competitive behaviors occur within social groups. In yellow-bellied marmots, competition occurs primarily by older females suppressing the reproduction of younger females. The pattern of reproductive suppression differs in other species with a different social system. 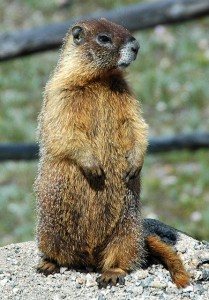 A critical life-history trait is energy conservation; marmots must accumulate sufficient fat to provide energy for hibernation and reproduction. Yellow-bellied marmots have several mechanisms to reduce energy used in maintenance during hibernation and the active season. The accumulation of large stores of fat is especially important for those species that mate and initiate development before terminating the hibernation period. Because of hibernation, much of marmot physiology is directed toward coping with low environmental temperatures and the conservation of water. As a consequence, yellow-bellied marmots are heat intolerant and cannot mobilize sufficient water for evaporative water loss when encountering thermal stress. This physiology restricts where marmots can live, affects diet choice, and influences daily activity cycles.

Some species of marmots have responded to climate change by moving upslope. Increased warming likely will cause earlier snowmelt, effectively increasing the length of the growing season which will allow marmots to emerge from hibernation earlier and increase both survivorship and reproduction. However, the increased dryness and higher temperatures in the active season may negate the benefits of a longer summer and marmot populations could decline. Although several life-history traits express phenotypic plasticity, it is not possible to predict if climate change will change the fundamental population dynamics of marmots.

In yellow-bellied marmots, population dynamics, including dispersal, does not act in a density-dependent manner and demographic trajectories are not correlated between colonies in the same area.

In effect, population dynamics is a consequence of the reproductive strategies of individual adult females acting within the matriline.

About the Author: Kenneth B. Armitage

Kenneth B. Armitage is author of Marmot Biology (2014). He is Baumgartner Distinguished Professor Emeritus of Ecology and Evolutionary Biology at the University of Kansas. His 40-year research project on the yellow-bellied marmot in the Upper East River Valley, Col...