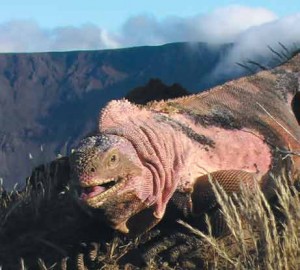 Here at Cambridge, when we hear “Galapagos,” we think Darwin. Many people do. But he didn’t catalog all of the strange creatures there. 150 years after Darwin’s visit the islands, scientists have discovered a new, pink iguana that dwells on a single volcano.

Don’t fret, Charles, it’s not your fault that you didn’t find it on your visit.

The iguana is found only in a single volcano! The geologist in Darwin was excited about the volcanic makeup of the islands, though. In July, 1835, during his Beagle voyage, he writes his 2nd cousin William Darwin Fox:

‘From this most wretched “city of the Kings” [Lima] we sail in a fortnight, from thence to Guyaquil-Galapagos-Marquesas-Society Isd., &c &c.- I look forward to the Galapagos, with more interest than any other part of the voyage.- They abound with active Volcanoes5 & I should hope contain Tertiary strata.- I am glad to hear you have some thoughts of beginning geology.— I hope you will, there is so much larger a field for thought, than in the other branches of Nat: History.— I am become a zealous disciple of Mr Lyells views, as known in his admirable book.— Geologizing in S. America, I am tempted to carry parts to a greater extent, even than he does. Geology is a capital science to begin, as it requires nothing but a little reading, thinking & hammering.’