From December 23, 1871 to September 13, 1873, one of the first embassies of Meiji Japan traveled throughout the US and Europe on a fact-finding mission. Led by Prince Iwakura, their task was to re-negotiate treaties with unfavorable conditions, and to learn of advanced technology in order to spur growth in Japan, which had been closed off to outsiders under Shogunate rule.

I’ll be posting excerpts from the trip’s diarist, Kunitake Kume; translations of his complete embassy diaries have appeared in a huge book, and soon as selections in Japan Rising, which we’ll publish later in the Spring. I’ve been reading it this week, and really enjoy it. Kume’s writing shows a keen sense of the great East-West cultural (and material) divide, and offers a really cool peek into the US during an exciting time, all through the eyes of an outsider.

A Record of San Francisco I

At first light this morning the sea fog was so thick that we could not distinguish objects which were only a foot away from us. The entire deck of the America was shrouded in mist. The captain therefore ordered the ship to heave to in the ocean for a while to await the dawn. As the sun rose and the mists began to lift, we could distinguish the mountains of California ahead. They emerged more clearly as the sun rose higher. The America advanced slowly. Directly to the east, two mountains ridges parted to reveal a great natural gateway. Through it we could see steamships passing to and fro with smoke rising from their funnels, making a truly beautiful sight. This was the celebrated Golden Gate. 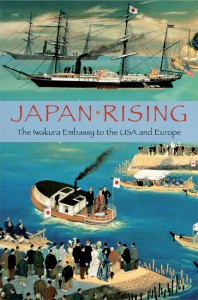 In our twenty-two-day voyage across the Pacific Ocean this was the first land we had glimpsed east of Japan. Words are inadequate to express our pleasure as we gazed upon this golden gateway, where sea and sky meet directly to the west and coastal mountains rise on both sides.

Today the America steamed into the bay flying the flag of Japan emblazoned with the red sun. The citizens of San Francisco had learnt of the Embassy’s visit from newspaper reports, and the news of our actual arrival was telegraphed from the Golden Gate to City Hall and to our consul. As a result, when we passed Alcatraz Island we were greeted with a fifteen-gun salute from the battery on its cliffs.

At eleven o’clock in the morning the mayor [William Alvord] came to welcome Ambassador Iwakura, accompanied by local navy and army officers. Then the consuls of the various countries represented in San Francisco came to pay their respects. After lunch the resident Japanese officials arrived, and at three o’clock a delegation of wealthy businessmen visited the ambassador.

At ten that night, on the paved street below the hotel rooms occupied by the Embassy, the band of the San Francisco artillery regiment gave a concert. The citizens gathered and cheered, celebrating our safe arrival. Ambassador Iwakura made a speech from the balcony, which Mr. DeLong translated into English. After that, he said a few words on his own behalf. The crowd cheered and clapped for quite some time. Western people are ever eager to promote trade and like to extend a warm welcome to foreign visitors. Such gatherings, which are part and parcel of American customs, are unusual in Japan. The concert ended at midnight and the crowds dispersed.