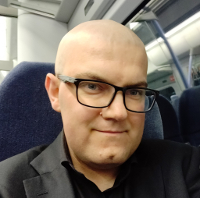 Martin Paul Eve is Professor of Literature, Technology and Publishing and the Strategic Lead for Digital Education at Birkbeck, University of London. Martin is also Visiting Professor of Digital Humanities at Sheffield Hallam University until 2022. Martin is the author of five books, including Open Access and the Humanities: Contexts, Controversies and the Future (Cambridge University Press, 2014). In 2017 Martin was named as one of the Guardian’s five finalists for higher education’s most inspiring leader while in 2018 he was awarded the KU Leuven Medal of Honour in the Humanities and Social Sciences and alongside co-contributors and the editor won the Electronic Literature Organization’s N. Katherine Hayles Award for The Bloomsbury Handbook of Electronic Literature. In 2019, Martin was awarded the Philip Leverhulme Prize for Literary Studies by the Leverhulme Trust.