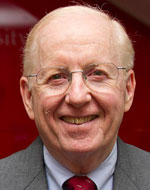 Edward J. Lawler is a co-author of Order on the Edge of Chaos (2015). He is the Martin P. Catherwood Professor of Industrial and Labor Relations and Professor of Sociology at Cornell University. He has co-authored three books and edited or co-edited thirty-one volumes in the annual series, Advances in Group Processes. In 2001, he received the Cooley-Mead Award for career achievement from the Social Psychology Section of the American Sociological Association, and in 2003 his paper, “An Affect Theory of Social Exchange” won the 2002 Theory Prize from the Theory Section of the American Sociological Association. His recent book (co-authored with Shane Thye and Jeongkoo Yoon), Social Commitments in a Depersonalized World (2009), won the 2010 James Coleman Best Book Award from the Rationality and Society Section of the American Sociological Association.