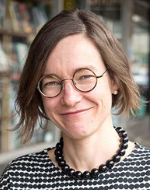 Alda Balthrop-Lewis is a Research Fellow in the Institute for Religion and Critical Inquiry at Australian Catholic University. She holds Bachelor’s and Master’s degrees from, respectively, Stanford University and the University of Chicago and gained a PhD from Princeton University in Religion, Ethics, and Politics. She has taught religious studies at Brown University and has also worked for the Peabody Award-winning public radio program ‘On Being’, produced in the United States. Her research, which focuses on religious ethics and the circulation of ideas among theological, artistic and popular idioms, has appeared in the Journal of the American Academy of Religion and the Journal of Religious Ethics. Her new book Thoreau’s Religion: Walden Woods, Social Justice, and the Politics of Asceticism will be published 2021 by Cambridge University Press, the first title to appear in ‘New Cambridge Studies in Religion and Critical Thought’, edited by Molly Farneth, Keri Day and Stephen Bush.