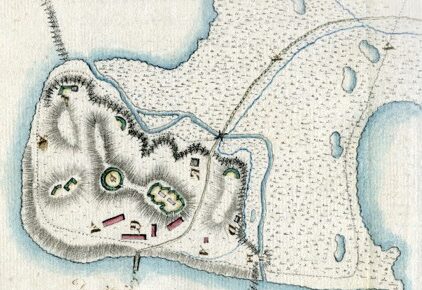 Counterinsurgent warfare is perhaps the dominant form of armed conflict of recent decades. Moreover, its counterrevolutionary variants and antecedents have been with us for centuries. My new book, The Counterinsurgent Imagination, aims to explain the origins of modern counterinsurgency doctrine, unpacking its messy and complex intellectual history, from early modernity to the present.

Historical strategies, tactics, and politics of irregular warfare vary widely. Counterrevolutionaries have variously sought to suppress revolt with extreme violence, with limited violence coupled with elaborate politics, with appropriations of insurgent or revolutionary strategies and tactics, and more besides. For the last several decades, counterinsurgency has been relatively consistent in its basic politics, strategy, and tactics. Yet that period of convergence has correlated, if anything, with reduced rates of counterinsurgent success. So why did we get this eventual consensus, and what happened along the way?

I start in the present, arguing late modern or current counterinsurgency is, politically speaking, conservative, high modernist, and utopian. It is conservative in the basic sense of being counterrevolutionary. Modern counterinsurgents, and their assorted forerunners, aim to preserve a given political status quo against potentially radical transformation. It is high modernist in James C. Scott’s sense. Counterinsurgents visualize a clean, clear, grid-like social order, usually devoid of detail and idiosyncrasy. Finding that vision disrupted, they imagine ways to reinscribe or recover it in the theatre of war. Counterinsurgency is utopian in imagining an idealized world. Unlike many utopias, it does not focus especially on the future—its idealizations more likely resemble the present or recent past. Still, it imagines remaking the world on utopian terms, shorn of actually existing detail and disfunction. Counterinsurgencies are thus conservative worldmaking projects: they imagine remaking social and political worlds, in line with particular conservative visions.

This is the relative consensus the book aims to explain. What caused counterinsurgency to take on this particular form? To explain, I reconstruct the varied and happenstance origins of modern counterinsurgency doctrines, over the modern period. I focus on counterinsurgency manuals: texts that record systems or assemblages of practical knowledge, for reuse in the future.

I proceed in two stages. First, I construct a narrative history of counterinsurgent ideas over the last several centuries, starting in early modern Europe. I show how state practices of irregular war first became counterrevolutionary, then later became high modernist and distinctively utopian—qualities already in view by the time the word “counterinsurgency” first surfaced in early 1960s America. Along the way, I show a range of ideas and practices recurred or resurfaced, often distorted by the passage of time or changes of context.

Then, for a closer look, I explore four cases of counterinsurgent thinking, in four manuals—three past and one (almost) present.

First, I look at Johann Ewald, a Hessian soldier with the British in the American Revolutionary War. Ewald came from early modern, Central European “small wars.” This tradition drew on a range of backwoods and peripheral Eastern European sources. It was ideologically more or less inert. I show how exposure to political revolution in America changed his thinking. The American revolutionaries both impressed him and redirected his thinking, by contrast or exclusion, in tacitly counterrevolutionary directions. Ewald’s diary of the “American War” documents his experience in remarkable detail (the map on my book’s cover is borrowed from it). The two manuals he went on to write informed European irregular war into the early nineteenth century.

Second, I turn to CE Callwell, a turn-of-the-20th century British small wars specialist. Callwell spent his long military career in the occupation of British colonies in Africa and Asia, and in the metropolitan administration of the imperial military. His knowledge of nineteenth century small wars was encyclopedic. I link his particular fixation on extreme and performative violence to imperial conservatism and colonial racism. I focus on his service in the Second South African War (the Boer War). Callwell wrote his manual Small Wars before the conflict and revised it after. It provides an opportunity to see how field experience did—and more often did not—change his thinking.

Third, I turn to David Galula, a postwar French military theorist with considerable US influence, who’s conception of counterinsurgency is associated with both Maoism and the Algerian Revolutionary War. Galula spent parts of his French military career as an attaché in Republican China, then in Hong Kong—witnessing Maoist revolutionary war directly in China, and at a distance in Southeast Asia. He went on to serve in the Algerian Revolutionary War, where he aimed to “test certain theories I had formed on counterinsurgency warfare.” His writings about these experiences went on to considerable influence in the United States.

Fourth, I look at the 2006 US Army and Marine Corps Field Manual 3-24: Counterinsurgency.  (FM 3-24), tracing its mix of historical sources and explaining its distinctively bureaucratic or managerial orientation. FM 3-24 provided the doctrinal justification for the surge in Iraq, circa 2007. Written by a team of American and allied officers and affiliated civilians, the text synthesizes ideas from history and the social sciences into the organizational vernacular of the contemporary American armed forces. Written hurriedly from a comparatively vast pool of sources, it is a complex and often fragmentary text, casting a range of old ideas in new forms and new ways of speaking.

Counterinsurgency, then, is something that’s changed dramatically over the long haul—yet often to remarkably little practical effect. Old ideas resurface, shorn of context, repurposed to new ends. Practices recur, whether or not they have any practical effect. The book wraps up with a critical rundown and a look at the future. I argue that, despite its recent failures in Iraq and Afghanistan, counterinsurgency is still with us. These patterns of misremembering and forgetting are likely to recur in the future.

About the Author: Joseph MacKay

Joseph MacKay is a Fellow in the Department of International Relations, Coral Bell School of Asia Pacific Affairs, Australian National University. He works on historical international security, international hierarchies, and the history of international thought....