Birdsong, Speech and Poetry: The Origins of Art 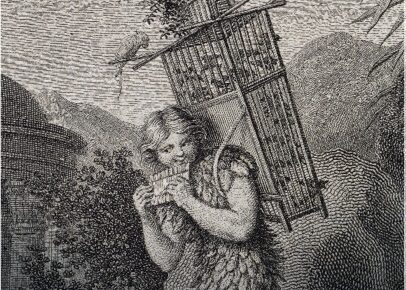 Outside my window, I can hear a bird – a tiny singing creature that raises larger profound and even now unanswered questions: why do birds sing? And what about our own arts of human music, speech and poetry? Where do they come from and what are they for? What are the origins of this love that we share with birds for making patterns and shapes out of sounds and colours? The truth is there are so many things that we still just don’t know. But even taking the time to ponder over these questions in my book, Birdsong, Speech and Poetry: The Art of Composition in the Long Nineteenth Century, felt like a wonderfully enriching thing to do. It changed the way I hear birdsong. It changed the way I think about poetry too.

In the late eighteenth century, the Vice President of the Royal Society and friend of Gilbert White, Daines Barrington, conducted a series of experiments from which he concluded that ‘notes in birds are no more innate, than language is in man’ (‘Experiments and Observations on the Singing of Birds’, 1773-4). Barrington drew significant behavioural parallels between the nestling’s first attempts at song and ‘the imperfect endeavour in a child to babble’; he argued that slight variations between the songs of nightingales inhabiting different districts might be ‘appositely’ compared to human regional dialects. In my book, I trace the ‘science of birdsong’ as it developed from Barrington’s ‘ingenious’ experiments to the increasingly controversial, evolutionary arguments of Charles Darwin regarding the origins of human music, speech and language. When I first came across this material, it was all entirely new to me and I found myself utterly fascinated by it. I began to wonder why I had never heard about any of this before. It was the beginning of a long journey, which led me to confront some of the blind-spots that so often prevent us from even noticing such seemingly ‘trivial’ things.

In the long nineteenth century, scientists recognised significant continuities between birdsong and human music, speech and poetry. At the same time, however, they increasingly turned their attention to the internal mental faculties as the distinguishing marks of an evolved and uniquely human language. My book explores the social, cultural and political implications of an equation between language and thought in the long nineteenth century. The apparent absence of language in animals was widely seen to reflect an absence of reason or even consciousness, and was (as it continues to be) covertly used to justify the ubiquitous mistreatment of ‘dumb’ creatures that Thomas Hardy decried as both illogical and inhumane, and ‘in strictness a wrong’. As they responded to these larger debates, scientists and poets throughout this period, from William Wordsworth to Charles Darwin, reflected on their own experiences and the immense difficulty they habitually encountered in attempting to translate their own thoughts into words. Perhaps drawing a little from some of my own experience in writing the book, I began to notice those moments in which writers refer to a subvocal language of the mind that is patterned, shaped, though not always or exactly worded.

When I began researching this topic, I often found myself coming up against a scholarly argument regarding the dangers of anthropomorphism: this tendency we have to see our own image reflected back in every stream, to hear about own thoughts and feelings echoed back in every bird’s note. While I understood the arguments being made, they began to feel overly insistent and at risk of sliding into a form of what the the primatologist Frans de Waal has termed ‘anthropodenial’: ‘the a priori rejection of shared characteristics between humans and animals’ which ‘denotes willful blindness to the human-like characteristics of animals or the animal-like characteristics of ourselves’ (‘Anthopomorphism and Anthropodenial’, 2009). Whereas de Waal has called for a more open-minded approach to the behavioural parallels which connect human beings with our nearest relatives, the primates, I have in this book sought to sketch out a long history of ‘wilful blindness’ towards the special affinities between birdsong, speech and poetry.

How we think about other animals is still very much shaped by what Gregory Radick has termed the ‘extreme skepticism’ of Victorian science. In our own times, Darwin’s suggestion that robins sing in winter because they ‘take pleasure’ is still being attributed to his supposed tendency to anthropomorphise. If it is true, however, that we can never know what passes in the mind of an animal, then surely we cannot rule out the possibility that robins sing, at least in part, ‘for their own amusement’. For natural historians from Pliny to Francis Allen, it has proved difficult to ‘escape’ the conclusion that the evolution of birdsong pre-figures ‘an aesthetic sense in the birds themselves’. I am neither an ornithologist nor a philosopher, and my intention in this book is not to determine, one way or another, whether robins experience pleasure in singing. My approach is contextual and literary critical. I am concerned with the history and politics of a debate about animal language in the late eighteenth and nineteenth centuries; in tracing that history, I examine the ways in which scientific findings have been transmitted to and interpreted by philosophers, poets and the wider culture.

While the followers of Descartes continued to describe animals as mere machines wholly devoid of reason or even consciousness, an alternative school of thought began to recognise in birds the kind of artistic, skillful and self-aware animal minds from which they believed human music and speech had originally evolved. Focusing especially on the writings of Samuel Taylor Coleridge, William and Dorothy Wordsworth, John Clare and Thomas Hardy, I argue that writings in this period reflect a complex shift in how human beings came to perceive the art of birdsong, and how they came to perceive, measure and value their own art by the contrast.

All of the writers I discuss in the book are excellent field observers (as well as exceptionally good listeners), belonging to a literary line that Jonathan Bate first began to sketch out in Romantic Ecology (1991). They were all out watching, listening and taking down notes about why robins sing in winter or which musical key a neighbouring owl might be hooting in. They were also all avid readers, with multifarious interests in natural history, ornithology, philology, psychology and, of course, poetry. What comes across in their writings is that these are incredibly wide-ranging thinkers, who were carefully checking what they had read about birdsong in books against what they could see and hear for themselves out there on the ground. These writers come from quite different backgrounds and some had considerably more access to educational opportunities than others, but all of them share an intellectual curiosity and passion to explore the everyday mystery of birdsong.

What strikes me about these writers is that they each demonstrate an awareness of the poet’s propensity to make the sounds of nature, in Coleridge’s phrase, ‘tell back the tale | Of his own sorrow’ (‘The Nightingale’, 1798). But they were writing at a time when it was not only poetical fancies that were being brought under scrutiny; they belonged to a generation of men (and women) who collected, compared and vigorously disputed the facts about how and why birds sing. Ultimately, these writers get the balance between a respect for difference and an awareness of an active, albeit mysterious animal agency narrowly glimpsed in Clare’s description of the ‘shy come nightingales’ as they ‘seem to mutter oer their songs in fear’ (‘When first we hear the shy come nightingales’, 1832-7).

Birdsong continues to fascinate me, but my attention has increasingly turned to the strange sounds and antics of wetland birds in the mating season: the booming of the bittern, the drumming of the snipe or the ‘peewit’ of the lapwing. Like so many other things about wetlands, these peculiar mating rituals may be able to tell us something about the evolutionary origins of aesthetics or ‘sense of the beautiful’ (as well as how important our aesthetic tastes have proved in deciding what is valuable or worth conserving in the natural world). I am currently revising an article about John Clare’s fen poems, which developed out of my work with Jeremy Davies at the University of Leeds on his AHRC-funded project, ‘Experiments in Land and Society, 1793-1833’. I have also just begun a six-month AHRC International Placement at the Library of Congress, which has further enabled me to compare Clare’s writings about wetlands with those of the American essayist Henry David Thoreau, who discovered in even the most ‘dismal’ of American swamps ‘a sacred place, a sanctum sanctorum’ (‘Walking’, 1862). When I return to the UK in the spring, I will be drawing together my interests in sound, aesthetics and environmental history as I begin my new role as postdoctoral researcher on an international, interdisciplinary project, jointly hosted by Humboldt Universität zu Berlin and Cardiff University: ‘The Sound of Nature: Soundscapes and Environmental Awareness, 1750-1950’.

About the Author: Francesca Mackenney

Francesca Mackenney is currently undertaking an AHRC International Placement at the Library of Congress. Her monograph, Birdsong, Speech and Poetry: The Art of Composition in the Long Nineteenth Century, was published by Cambridge University Press in 2022. Alongside her research on birdsong, her attention has increasingly focused on exploring the r...