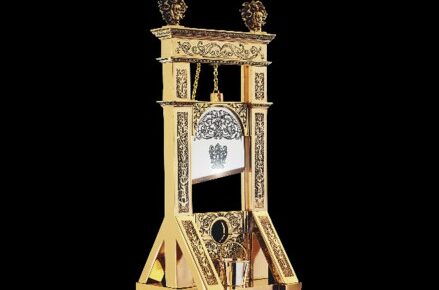 In the spring of 1716, the entire French financial community was put on trial in a ritual prosecution known as the chambre de justice.  Over the preceding centuries, these trials were held periodically, usually after wars, when a royal debt crisis was looming.  Although they mostly were not very effective (most of the richest financiers either fled France temporarily, or paid bribes to avoid prosecution), they were predicated on the idea that finance—understood then as the process of lending money to the Crown—entailed so many possibilities for malfeasance and corruption that everyone involved had probably done something illicit at some point.

The eighteenth century was full of financial crises, dramatic bankruptcies, and perennial problems with French sovereign debt.  But by the time of the Panic of 1825, somehow financial crises had gone from being thought of as crimes, followed by prosecution and featuring a conflict over sovereign immunity, to being something more like a natural disaster: inevitable, unfortunate, and nobody’s fault.  My book, Impunity and Capitalism: The Afterlives of European Financial Crises, tells the story of how that change happened.

The book adapts the concept of impunity from international law and applies it to economic institutions, and it uses three international financial crises (the first one, in 1720, the rupture of the French Revolution, and the Panic of 1825) to explain how the distorted historical memory of past crises created new extra-legal and a-legal spaces for financial malfeasance, gradually diffusing the popular and technical understanding of the moral and legal responsibility for crises from immune sovereigns to “the market” itself.  In 1716, a crisis was potentially everyone’s fault, unless the sovereign granted immunity, but by 1825, the defining feature of the economic sphere is that within it, great harm can and will befall a great many people without anyone in particular being at fault.

This book happened for two reasons.  The first is methodological.  I am an economic historian, and one of the most influential schools of thought in economic history focuses on institutions, which are “the rules of the game” that constrain economic actors, including sovereigns.  This school of thought has produced decades of rich scholarship on trust mechanisms, credible commitments to protecting property rights, and the creation of safe investments, often showing that institutional arrangements from the past which might seem strange to us today actually had some rational economic logic.  But that wasn’t what I found in the archives.  Instead, the archival record is packed with a disorderly profusion of elite malevolence and especially a pattern of persistent exemption from rules and consequences.  I thought there must be some way to make sense of this evidence, and that led me to an attempt to define and historicize impunity as an economic and political phenomenon.

The second reason is contemporary.  The generation of historians who wrote their first books in the 1980s and 1990s focused much of their attention on the power of the state.  They wrote about how state surveillance, enumeration, standardization, and expert administration produced and governed different categories of people.  They wrote about censuses, development projects, and knowledge production, and employed the Foucauldian concept of “governmentality.”  My generation of scholars, who experienced the Iraq War and the 2008 crisis as young adults and who began graduate training and book writing afterwards, have mostly shifted away from the state.  Many of us are under the influence of Occupy, Thomas Piketty, and the political events of 2016, and I think we are collectively writing something like a “global history of the one percent.”  From at least the Iraq War onward, the history of our time has been a continual crisis of elite impunity.  Impunity and democracy tend to be antithetical to each other, so the persistence of impunity has become a crisis of political legitimacy, and indeed the legitimacy of liberal democracy as such.  The structure of impunity around us today is very different from that of the eighteenth or nineteenth century, but my aim with this book was to show that impunity can be historicized, and that it also can change.

I hope to provoke economic historians to think more about what happens when institutions fail, or succeed only at producing inequality, and I hope to provoke historians to write their own histories of inequality and impunity, because I think those themes can unite us across the divisions of time and space that define our specialties.  And I hope to interest other readers because the book is full of scandals, disasters, crises, heists, and appalling behavior, as well as a couple of jokes, and a theory of capitalism.

About the Author: Trevor Jackson

Is There a Bubble in the Stock...