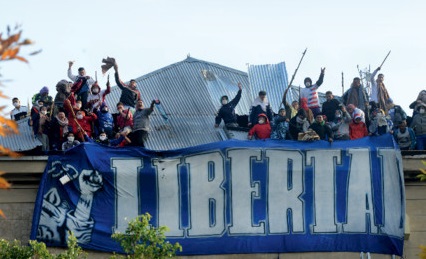 In the last days of February, prisons in the region demonstrated the nature of the crisis in which they are submerged. In Ecuador, on the 23rd, a series of riots ended in at least 79 deaths. A few days before, in Paraguay, prisoners had taken control of the Tacumbu prison, the largest in the country, where 8 people died and hundreds were injured in an apparent struggle for control of the drug market between organized criminal groups. And in Haiti, on 25 February, 8 people, including the prison director, died in a prison on the outskirts of Puerto Príncipe in an escape attempt. All this in a single week!

Beyond these “major” events, daily violence is a permanent feature of the majority of prisons in Latin America. Many of them are self-managed by inmates, health conditions are insufficient, there are regular struggles between gangs for control of the prisons, extortion is increasingly common, and overcrowding has become a chronic problem. In many countries in the region, certain crimes committed outside the prisons are practically administered and controlled from within, for example, extortion in San Salvador, the sale of drugs in San Paulo, and telephonic extortion in Mexico City. These are networks with considerable economic capacity who are able to maneuver with greater dynamism and creativity than the authorities.

But the riots and take-overs of the prisons are just the tip of the iceberg in the severe crisis shaking the region. While politicians look to impress their constituents by adopting “tough on crime” measures and locking up an increasing number of young people, they quickly forget that rational imprisonment calls for investing in prisons and the rehabilitation of inmates. Such divestment has a high cost, as most prisoners who are released at some point, are generally young people who are full of resentment, with established networks in the criminal world, and few opportunities to desist from crime. Instead of resolving the problem of citizens’ insecurity, Latin American prisons aggravate the problem.

The situation is so severe, that it is perhaps no longer even accurate to say that Latin American prisons are in crisis. Rather, they have become something else entirely. In reality, these prisons are drivers of crime. The boundaries between prison and society have become so blurred, that being imprisoned has become merely ‘part of the job’, a “right of passage” for career criminals. At the same time, prisons have become a familiar place for many families who are used to one of their members spending time behind bars. Latin American prisons no longer deter, nor incapacitate, nor reinsert prisoners.

Much can be done within such a context, but perhaps first and foremost is the need to re-think the very role of prisons in Latin America.

About the Author: Marcelo Bergman

Marcelo Sergio Bergman is Professor of Sociology and Criminology at the National University of Tres de Febrero (UNTREF). He has conducted empirical research on crime for the last twenty years while working in the USA, Mexico, and Argentina. His book More Money More Crime (2018) won the 2019 most outstanding book award by the Comparative and Interna...

About the Author: Gustavo Fondevila

Gustavo Javier Fondevila is Professor of Law at the Center for Research and Teaching in Economics (CIDE). He is one of Latin America's foremost criminologists and is a leading expert on prisons in the region. Fondevila has published numerous books and papers in prestigious international criminology journals....