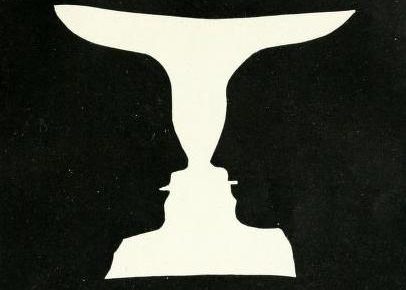 According to figures generously supplied by Martin Wiggins, of the approximately 3000 plays that were written between c.1567 and 1642 in England, a mere 543 from the public theatres have survived in print or manuscript. In other words, whenever we try to understand Shakespeare’s forty or so surviving plays in the context of the theatre of his own day, any conclusions we might draw are potentially distortions, based on the surviving minority of the period’s dramatic output. We cannot afford to ignore the lost majority of early modern drama: it is arguably the most important and neglected context for understanding Shakespeare’s dramatic works. But how can we study things that don’t exist?

To acknowledge the enormity of the loss is to recognise that the situation calls for a fundamental shift in the way we think about the drama of Shakespeare’s time. A metaphor is helpful here. Danish psychologist Edgar Rubin developed the now iconic two-dimensional image of a vase – ‘Rubin’s Vase’ – whose contours (one slowly notices) are shared with a contiguous image of two faces looking at one another. In Shakespeare and Lost Plays, I argue that as long as Shakespeare scholars focus on play-texts and ignore lost plays, we will only ever continue to gaze at the figure of the vase, and remain ignorant of the two faces that give the vase its shape and which constitute a significant image in their own right. We are seeing less than half the picture of early modern drama.

I have two aims for my book. First, by focusing on Shakespeare as a commercial playwright with a vested interest in his company’s success (as an actor, playwright, and shareholder), I want to think about how his plays relate to both the lost and the extant plays in his company’s repertory, and in the repertories of the other London companies. Shakespeare influenced and responded to the plays being performed in London, but his work has yet to be contextualised in terms of the lost five-sixths of the period’s drama. Doing so reveals to an unprecedented extent the often unexpected ways in which Shakespeare’s plays were related to the theatrical industry’s other commercial offerings.

A second aim in writing this book is to develop a method of working with significant losses and lacunae in the documentary record: to balance the canonical (Shakespeare) with the ultimate ephemeral (lost plays) and produce meaningful insights. Too often, I fear, we as scholars feel obliged to craft a theory from limited evidence and present our conclusions as if they were facts. I argue that when faced with the extensive losses that characterise our field, there is virtue in exercising restraint and offering tentative conclusions; that being transparent about our handling of evidence and the limits of inferential license is an essential element of responsible scholarship.

In a way, this book is about testing what can be said on the basis of available evidence, and exploring approaches to academic writing that acknowledge both the limitations and productiveness of careful conjecture. I hope it helps us to see a clearer, more complete picture of early modern drama than has hitherto been possible, and I hope it models a methodology that questions received narratives, embraces the possibilities inherent in contingencies, and makes room for fresh insights.

About the Author: David McInnis

David McInnis is Associate Professor of Shakespeare and Early Modern Drama at the University of Melbourne. With Roslyn L. Knutson and Matthew Steggle, he founded and co-edits the Lost Plays Database. He is also co-editor of Lost Plays in Shakespeare's England (2014) and a sequel volume, Loss and the Literary Culture of Shakespeare's Time (2020). Hi...

Hemingway the movie: behind the...

Hemingway the movie: behind the...

What We Can Learn from Victorian...