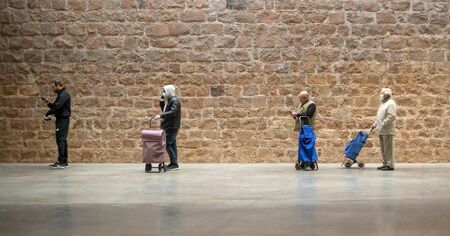 Until December 2019, I was in Nanjing, some five hundred kilometres from Wuhan where the first cases of the new lung disease were then discovered. When things unfolded in January, I initially felt a sense of having escaped a potentially fatal danger by a hair’s breadth; only to realize a bit later that this wasn’t so. That Duisburg, the city of my university, happens to be a partner city of Wuhan is a coincidence. More important is the fact that both cities are on the same planet which also houses Covid-19.

What do we make of it? To capture a facet of this experience, I questioned some one hundred people, aged 12 to 90 in some 30 countries, between mid-May and the end of June 2020. I asked them to answer three questions in one sentence each:

The overwhelming response rate of over 95 per cent suggests that the addressees did not consider my request an undue invasion of their privacy. Rather, many of them welcomed the opportunity to contemplate the occurrence. I learnt many things from this poll and am deeply grateful to each and every one of the participants for sharing with me and an unknown readership their thoughts about this extraordinary, hopefully unique, event.

‘Loneliness, helping hands, TRUTH’ – succinct and pointed, this is how an erudite gentleman from New Delhi answered the three questions, grasping in extreme density the essence of what many respondents thought. A review of all responses shows that the side effects of social contact restrictions, new forms of solidarity, and the want to know the facts stand out, although many other topics are also touched upon. Suffice some examples to illustrate.

What was the worst?

Loneliness, not always called that, is mentioned by respondents of all age groups. A particularly sad aspect of loneliness comes up several times: ‘The death of many people in the hospital without any possibility to say goodbye or hug them.’

Uncertainty. COVID-19 evokes a feeling of uncertainty so acute that several participants cited it as the worst part of the experience. It comprises a sense of vulnerability, the inability to plan the next step, and a peril whose gravity we cannot assess.

Inequality. Most respondents enjoy a rather comfortable life, of which COVID-19 reminded them. Others are in a more precarious situation. These differences find expression in the results of the poll in that some of the latter mention loss of income as ‘the worst’, while some of the former point to inequality, both social and economic, as a major problem.

Lack of preparedness is a charge directed at several countries, including the US and the UK. An altogether different kind of unpreparedness, but a very worrisome one is the ‘risk of bacteriological warfare’ pointed out by a Spanish sociologist.

Distrust of scientific knowledge was repeatedly adduced as ‘the worst’ and that some prominent people exploit their media salience to deny the existence of reliable data.

Politicisation. A related grievance is that ‘the pandemic was being trivialized by various political forces, most devastatingly in US and Brazil.’ In other countries, too, it is abused for political purposes.

Irresponsible behaviour. Having to deal with an exceptional situation reveals certain characteristics that have personal, national and cultural aspects. In some countries, wearing face masks is a common-sense sanitary precaution, in others a threat to civil rights.

What was the best?

Helping hands were indeed what people most appreciated, terms such as ‘mutual regard’, ‘standing together’, ‘humanity’, ‘the willingness to help’, among others giving expression to a widely shared feeling.

Family ties. ‘To see what we can cope with together as a family,’ is a typical answer about another ‘best’, the family as a source of joy and satisfaction.

Time. Hectic and crowded agendas were a normal part of life for most of us. All of the sudden there is more free time. Deceleration is, therefore, hailed as an unexpected and valuable benefit of the crisis.

New forms of communication were largely welcomed (though also feared as harbingers of constant government control).

Values. Some respondents saw in the crisis an inspiring opportunity to reflect on essentials, human values, one’s own life, to stop and think and deepen one’s self-knowledge.

Hope for the future

The wish list for the future is long and diverse, ranging from the instant and personal – a teenager from Paris longs for ‘the seaside in the summer rather than a second wave’ – to the long-term and global – an economist from California hopes ‘that America can remain as world power and counter weight to Russia and China’. Other noteworthy hopes include ‘back to normal quickly’ and ‘just don’t go back to pre-Corona times (economically, politically, psychologically, and rhetorically). Rather gloomily an Italian economist warns that ‘there is no hope, unless we learn to redistribute wealth differently.’

‘To be better prepared medically and organisationally’ is just one expression of the often-cited hope for lessons to be learned. Several participants hope that scientists will point the way out of the crisis by providing an effective vaccine and treatment drug.

Participants also regard COVID-19 as a welcome opportunity to actively address climate change and a motivation to see the future more as a global future.

And then there is one hope that resonates in many answers, TRUTH, with capital letters, as the Indian sage put it. This is directed at the willingness of governments honestly to communicate with the public, but also is to do with the fact that in this age of uncertainty there is a strong desire for truth as a guideline to act. ‘I hope that there will be no more cover up,’ is the most explicit expression of this hope regarding the former aspect. As regards the latter, especially when we are among scholars, since, unlike the Black Death of the mid-fourteenth century in Europe, we cannot attribute COVID-19 to the wrath of God, we have to live with trust in and hunger for truth as well as the insight that at best we can satiate it temporarily. Yet truth gives us hope.

About the Author: Florian Coulmas

Florian Coulmas is Senior Professor of Japanese Society and Sociolinguistics, IN-EAST Institute of East Asian Studies, University of Duisburg-Essen.  His previous books include Literacy and Linguistic Minorities (1984), Language Adaptation (Cambridge University Press, 1989), Language and Economy (1992), The Handbook of Sociolinguistics (1997) an...