Sinking Feelings: the Cause of Allied Victory in the Mediterranean during the Second World War 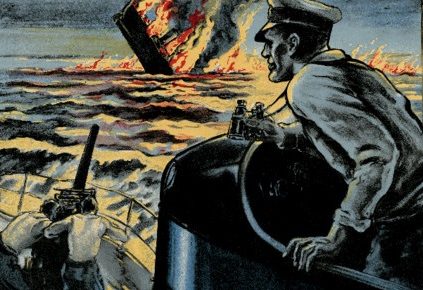 ‘My illness has a name: convoys’ was the gloomy remark from the fascist Italian dictator Benito Mussolini in 1943, as the Axis powers’ war in North Africa neared its disastrous conclusion. It is hardly surprising that he reached such a verdict: over the near three-year course of the war in North Africa, 1,350 merchant ships and oil tankers totalling almost 2,300,000 tons had been sunk by the Allies or lost to other causes. Many more had been damaged and there were further losses to come over the second half of 1943 and throughout 1944.

The impact of these losses on the European Axis powers was disastrous, not just for their fight in North Africa, but for their broader war in the Mediterranean region. The denial of key supplies to the Italo-German forces in North Africa at key junctures fatally undermined their ability to fight effectively. Beyond the confines of the North African shores, however, the loss of such large quantities of shipping was causing a collapse of the Axis Mediterranean position. Axis bases such as Sardinia, Corsica, and those across the Aegean, gradually had their maritime lifeline strangled. They became millstones rather than assets to the Axis cause and were soon abandoned.

This is an immensely important issue when assessing the reasons for ultimate Allied victory not just in the Mediterranean, but in the Second World War as a whole. Fundamentally, control of the Mediterranean was vital to both opposing coalitions as an essential route of transit in a global war. For the Allies, it was a vital artery between east and west, allowing a relatively quick and efficient method of transferring men and materiel between the various theatres of the war. For the Axis powers, wresting control of the Mediterranean from the Allies, or even merely contesting it, could sever this route, as well as provide them with their own easy access to Africa and the Middle East. The result of Axis victory in the Mediterranean would be to greatly curtail one of the Allies’ greatest strengths: their global mobility. Meanwhile, it would simultaneously help to alleviate one of the greatest weaknesses of the Axis powers, by providing them with the opportunity to access the oilfields of the Middle East.

Ultimately, it was attrition to Axis shipping that was the biggest factor in reversing their expansion across the Mediterranean and removing their ability to contest control of its waterways. Their attempts to secure North Africa and the Middle East were stymied by the throttling of seaborne supplies on which their expeditionary forces depended. Instead of conquering Egypt, the Italo-German war in North Africa culminated with a mass surrender of troops in Tunisia greater even than at Stalingrad. Their ability to threaten the east-west sea routes from island air bases such as those in Sardinia, Sicily and Crete was eliminated, as they could not keep them provisioned by sea. Instead, their ability to use such bases offensively was progressively degraded and ultimately they were abandoned.

This is the new argument I put forward in Strangling the Axis. By making use of an exciting range of previously underused sources, from all the major belligerents that took part in the war in Mediterranean, I argue that it was Allied attrition of vital Axis shipping stocks that was the key factor in victory. Unable to match the rate of loss with new construction, purchases and seizures, the Axis maritime supply network on which they depended simply collapsed. It is little wonder, then, that Mussolini complained of such a painful and intractable malady.

About the Author: Richard Hammond

Richard Hammond is a Lecturer at Brunel University and is Vice-President of the Second World War Research Group. He is the recipient of the Society for Military History's Moncado Prize and the Corbett Prize in Modern Naval History (Proxime Accessit)....

Indigenous Peoples and the Second...

Indigenous Peoples and the Second...

The British Army and the First...