Silk in the Atlantic World – a dream unravelled?

How we understand and respond to failure is one of the most defining features of how our lives pan out. Some people refuse to fail. Some people expect to fail. Some people always hide from their own failings (most of these currently seem to be in politics). Others always look for failings in themselves, or worse, in others. But whether it’s a driving test, or an omelette, or a relationship, or – for many of us in recent times, trying to get used to home schooling and mapping a network drive – we all confront failure in a host of different guises. What do our failures tell us about who we are?

My book carries this question back to the period between 1500 and 1840 in exploring the numerous failed attempts to raise silkworms and produce raw silk in the Atlantic World – from Mexico to Sweden, and from Louisiana to Vermont. As a historian with no background in textiles or aesthetics – as most of my friends and students would readily acknowledge – this involved a lot of learning alongside my historical subjects. It often felt like I was reading over their shoulders as colonists consulted advice literature on how to plant mulberry trees, how to hatch bags of silkworm eggs, how to sustain and nurture growing caterpillars, and how to select the finest cocoons and to reel off their filaments to generate skeins (bundles) of raw silk. As I unwound a single cocoon onto a pencil over the course of several hours with my daughter, I was struck by how this material practice changed my perception: our delight in the gloss and length of the fibre, versus the frustration and dexterity and time commitment involved as novices.

Silk was hardly a failed global commodity. It was instrumental, as we all know from the famed ancient ‘Silk Roads’, in linking merchants, cultures, and production systems together. Silk manufacturing became a vital cog in the engines of developing European economies in Italy, Spain, France, and Britain. But although raw silk production had spread across the globe to reach the eastern shores of the Atlantic by 1500, and although the New World thereafter swiftly became an iconic site for the expropriation of raw materials (gold, sugar, rice, tobacco, cotton), raw silk never made it into the bracket of commercial winners.

This was not for the want of trying: Castilian experts taught the art of silk raising to Mixtecan Native Americans in the sixteenth century, Anglo-Virginian planters brought Armenians to the Chesapeake in the seventeenth century, French projectors transferred materials from Provence to Louisiana in the early eighteenth century, while British colonies persisted with creative efforts to harness enslaved African labour in the Lower South and congregationalist networks in New England. Indeed, I argue that while some European powers retreated from transatlantic raw silk efforts to consolidate their domestic production, the British showed a persistence that reflected their empire’s changing dimensions and commercial particularities. In due course, independent Americans would also develop their own claims and efforts to domesticate production that peaked in the early nineteenth century. In the process of comparing these imperial efforts, it was possible to locate common problems and features that help explain why so many were compromised. For example, oceanic transport, limited disposable labour pools, and a lack of expert reelers often constrained production, sometimes in ways that were distinctive to the Americas: the fragility of early American plantations mirrored the fragility of the Bombyx mori silkworms.

By rooting around the middens of history – these and other failed endeavours – I believe we can find important insights, especially into the operation of gender, race, and environmental determinism. Unravelling failure helps us to restore a clearer sense of historical contingency, to challenge complacent claims, and to render visible the involvement of ordinary people in shaping global commodity flows. So while American raw silk did not generate much (if any) profit for its proponents, who was to tell Martha Harness that her seven-foot wedding veil in 1817, made from cocoons raised at her family’s Virginia plantation, was meaningless? How we forget failure and how we study it depends on what we choose to value, and what we choose to see through. 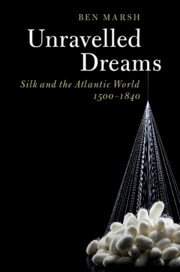 About the Author: Ben Marsh

Ben Marsh is Reader in History at the University of Kent, Canterbury. He is the author of the award-winning Georgia's Frontier Women: Female Fortunes in a Southern Colony (2007) and Understanding and Teaching the Age of Revolutions (2017), and has published widely on early and revolutionary American history. His research on silk has featured in sev...