On November 21 the British comedian Sacha Baron Cohen delivered a keynote address on the occasion of being honored with the International Leadership Award from the Anti-Defamation League, an organization deservedly praised for their activism in tracking and countering anti-Semitism and other forms of bigotry. Cohen used the occasion to outline what, on first hearing, seems completely reasonable proposals to curb online hate-speech, alternative facts, and fake news, which reasonable people acknowledge to be scourges of the Internet. The speech went viral as Cohen catalogued well-known examples of “racism, hate and bigotry,” which he normally exposes with humor through his characters, for example, when Borat wheedled a barroom of drunks to sing “Throw the Jew down the well.”

According to Cohen, racism, hate and bigotry have only gotten worse since his filmic exposé of our inner demons, driven primarily by “the greatest propaganda machine in history”—Facebook, YouTube, Google, Twitter and others. Pluralistic democracies, he warns, are “on a precipice” and the next twelve months will determine which way they fall. In order to save democracy, Cohen concluded, we must curb the freedoms we grant these Internet juggernauts.

To his credit, Cohen distinguished between government censorship of speech expressed by private companies and individuals, which is protected by the First Amendment, and self-censorship by these companies in the form of screening what gets posted on their sites. But this leads to two problems, one practical and the other legal.

Practically, such filtering of content would require hiring armies of censors to read or review every article, essay, video, or statement of any kind, a rather formidable requirement given that, for example, there are 1.3 billion YouTube users who upload 300 hours of video every minute, with 5 billion videos viewed each day. It would take a Napoleonic-size army to screen them all.

But this is not the ultimate problem with Cohen’s plan. The deepest flaw in such censorious speech management can be outlined in ten points that apply to all such motions to counter hate speech with censorship, which form the core of my 2020 book Giving the Devil His Due:

1. Who decides which speech and thought is acceptable and which is unacceptable? The majority? A thought committee? The language police? Historically, the control of speech is how autocracies rule. We must resist the urge to control what other people say and think.

2. What criteria are used to censor certain speech? Anything that the majority determines is unacceptable? This is another form of tyranny—a tyranny of the majority.

3. It is not just the right of the speaker to speak and writers to write, but for listeners to listen and readers to read.

4. We might be completely right but still learn something new in hearing what someone else has to say.

5. We might be partially right and partially wrong, and by listening to other viewpoints we might stand corrected and refine and improve our beliefs.

6. We might be completely wrong, so hearing criticism or counterpoint gives us the opportunity to change our minds and improve our thinking. No one is infallible.

7. Whether right or wrong, by listening to the opinions of others we have the opportunity to develop stronger arguments and build better facts for our positions.

8. Arguments made in favor of censorship and against free speech are automatically gainsaid the moment the speaker speaks—otherwise we would be unaware of their arguments if they were censored.

9. Freedom of inquiry—a form of free thought and speech—is the bases for all human progress because of human fallibility. We are all wrong some of the time (and many of us most of the time) so the only way to know if you’ve gone off the rails is to tell others about your beliefs so that they may be tested in the marketplace of ideas.

10. My freedom to speak and dissent is inextricably tied to your freedom to speak and dissent. If I censor you, why shouldn’t you censor me? If you silence me, why shouldn’t I silence you? Once customs and laws are in place to silence someone on one topic, what’s to stop people from silencing anyone on any topic that deviates from the accepted canon?

One person’s hate speech is another person’s free speech. During the 1830s many Southern states enacted laws to “protect” their citizens from hearing abolitionist speech, arguing that it could lead to slave rebellions and violence. In the words of South Carolina Senator John C. Calhoun, abolitionists “libeled the South and inflicted emotional injury.” In the 20th century, civil rights activists opposed viewpoint-based censorship, knowing that their call for black Americans to be granted the same rights as white Americans would be considered “hate speech” by a great many southern citizens. And there are countless examples of autocrats, theocrats, and dictators of various political stripes silencing their critics by enacting laws to curtail speech deemed to be a threat to the regime. Even the United States Supreme Court Justice Oliver Wendell Holmes declared speech that challenged the draft during U.S. involvement in the First World War to be “a clear and present danger,” a judgment he later regretted when he saw the effects of the censorship laws that followed, ultimately concluding that “It is better for those who have unquestioned and almost unlimited power in their hands to err on the side of freedom.”

Call it Holmes’ Axiom: Err on the side of freedom.

Michael Shermer is the Publisher of Skeptic magazine and a Presidential Fellow at Chapman University. He is the author of The Moral Arc and Heavens on Earth. His next book is Giving the Devil His Due, to be in April. 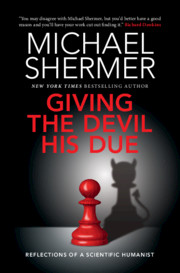 Giving the devil his due by Michael Shermer

About the Author: Michael Shermer

Michael Shermer is Presidential Fellow at Chapman University, California, the Publisher of Skeptic magazine, and the host of the Science Salon podcast, and for eighteen years he was a monthly columnist for Scientific American. He is the author of a number of New York Times bestselling books including Heavens on Earth (2018), The Moral Arc (2015), T...