Voter turnout among young Americans has been dismal since 18-year-olds earned the right to vote with the passage of the 26th amendment in 1971. Even in 2018—a high water mark for youth voting—a full 7 in 10 voters failed to turn out. In most Presidential and Midterm elections it’s not uncommon to see older voters turn out at a rate twice as high as their younger counterparts.

These patterns have a significant negative impact on our democracy. Among other things, youth disengagement increases the—already powerful—balance of political power toward the concerns of the elderly. Low youth turnout also deprives young people of the civic benefits that come from participating in this foundational act of democracy.

Why don’t more young people vote? And what can we do to help address the problem of low youth turnout?

Some people argue that the reason that younger Americans fail to turn out is that they are apathetic about politics. Pundits commonly lament that Millennials are cynical, disinterested, and self-absorbed—turned off by today’s polarized environment or more concerned about taking selfies than participating in civic life.

The problem is, that this simply isn’t true! As the figure below shows, young people are very interested in politics—and this is especially true in recent years, when polarization has been especially pronounced. 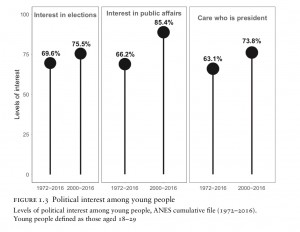 So, what is the problem? Though many young people want, intend, and even plan to vote, they are much more likely than their elder counterparts to be derailed by the obstacles that stand in the way of them voting. Young people are twice as likely to fail to follow through even when they say that they intend to vote compared to older voters. The problem for young people is not that they are disinterested in politics; it’s that they too often fail to follow through on their good intentions because of the personal and institutional distractions and barriers that get in the way. 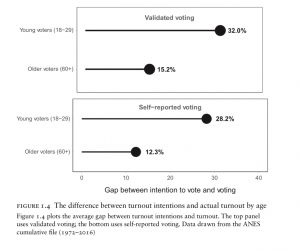 We have identified two reforms that would help young people convert their civic attitudes into civic action.

First, electoral reforms can help reduce the complexity of registering and voting.  Many states have substantial institutional hurdles that must be cleared to vote—such as when, where, and how one can register to vote and what materials one needs to take with them to the polls. Even though these may not seem like that big of barriers to people who have been established in their communities for a very long time, these are bigger obstacles for new and young voters.  Reforms like Election Day registration, preregistration for 16- and 17-year-olds, automatic voter registration, and in-class registration drives in high schools would go a long way towards reducing the barriers to participation. In our work, we find that these reforms tend to have an especially large impact on young people coming into the electorate for the first time.

Second, we need to transform civic education in the United States.  At present, many schools follow what we call ‘bubble sheet civics’ by focusing all of their attention on teaching facts and figures about politics, government, and history. This approach simply doesn’t work. Students who take more of these traditional civics classes are no more likely to vote than those who take fewer and states that require more (bland) civics classes to graduate high school have similar youth voter turnout to those that have lower graduation requirements.

The types of school programs that help the most are the ones that focus on contemporary political issues, get students involved in civic and political action (e.g. registering other citizens to vote or working on a community problem), and that teach young people the applied skills that they need to follow through on their good intentions. We find that school programs that focus on teaching young people to follow through on their good intentions have a large impact on voter turnout. One such program—the Fast Track intervention—implemented in the 1990s was particularly successful at making young voters. This program spent a few hours each week of the school year teaching young people to work well with others and persevere when things got difficult. This program had long-term benefits: increasing youth turnout by 30%.

Even if, however, schools spend less time on teaching young people the ins and outs of voting they have the potential to have a large impact on voting. Indeed, we have good evidence that simply taking the time to teach young people how to vote, to practice interacting with a voting booth, and registering them to vote can have a big impact. These types of reforms have been shown to increase rates of youth turnout by as much as 6 percentage points.

To make young voters, we need to do more than we’re already doing. Voting is unnecessarily complex for young people and civics is not doing what it needs to do to bring the next generation of citizens to the polls. Much is at stake, but efforts to increase youth participation are well worth the attention of policymakers, citizens, and other vested parties interested in improving the quality of our democracy. 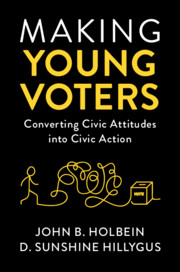 About the Author: John B. Holbein

John Holbein is Assistant Professor of Public Policy at the University of Virginia....

About the Author: D. Sunshine Hillygus