The World Trade Organization has always had more critics than champions.  These days, the charges that are made against the WTO include that it has overstepped its authority, that it impedes the ability of members to set their own trade policies, and, paradoxically, that it has been unable to deal effectively with China.  The recent U.S. decision to block appointments to the WTO’s trade dispute body has been described as a paralyzing, possibly lethal, blow to the WTO that could precipitate a return to the chaos of the 1930s.

But to anyone who has studied the history of the WTO’s predecessor -the inelegantly named General Agreement on Tariffs and Trade (GATT, 1948-1994) – none of this is new or surprising.  GATT was one of many specialist international organizations that came out of the Second World War, alongside the IMF, World Health Organization, and UNESCO.  Its job was to promote the growth of global trade by opening markets – initially by lowering tariffs – and this, so the reasoning went, would make the world more prosperous and therefore more peaceful.

Though many scholars and trade officials judge GATT to have been a great success, GATT was subject to constant criticism and repeated predictions of its untimely demise.  In 1948, the Soviet Union (not for the last time) denounced GATT as a tool of American capitalist-imperialism that would enrich the US and impoverish other countries.  Though this was clearly a Cold War-driven attack, many non-communists nonetheless agreed with the general point.  Developing countries denounced GATT as a ‘rich man’s club’ that perpetuated an inequitable global trade system.  A trade official from Nigeria compared developing countries in GATT to slaves who had only been able to ‘pick up the crumbs from the master’s table’ during the Kennedy round of negotiations (1964-1967).  Farmers around the world took to the streets in the 1980s and 1990s to protest GATT attempts to liberalize trade in agriculture.  They equated GATT with the death of rural life.  When GATT ruled against an American ban on tuna imports aimed at protecting dolphins, environmentalists depicted the organization as a rapacious Gattzilla.  As GATT membership grew, the organization became cumbersome and members turned to regional agreements in droves, prompting the dean of the business school at MIT in 1989 to pronounce GATT dead.

But GATT didn’t die.  Instead, in 1994, GATT members concluded the Uruguay round, the most complicated trade negotiations that had ever been attempted.  The WTO was a product of the round and GATT was folded into its larger successor.

What lessons can the WTO take from GATT’s beleaguered but successful history?  It shouldn’t expect to be loved or even appreciated.  Not everyone believes that an open and growing global economy is universally beneficial.  The promise of liberalism is deferred for many because open markets and economic growth create both winners and losers: the losers speak up more loudly than the winners and they are usually more sympathetic.  So, the WTO, like the GATT before it, will always have to make a case for open markets and economic growth.  That case can’t be convincingly made in abstract economic terms.  It is an argument that must place the human experience with trade front and centre and understand that global trade is a domestic and international political issue first and foremost.   Even if criticism abates, the WTO will always have to justify its existence.  Legitimacy must be won over and over. 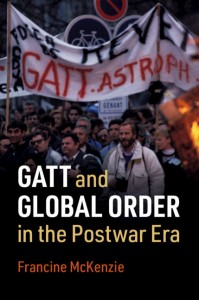 GATT and Global Order in the Postwar Era By Francine McKenzie

About the Author: Francine McKenzie

Francine McKenzie, University of Western Ontario Francine McKenzie is a Professor at the University of Western Ontario. She is an international historian who has published extensively on international cooperation, trade, and global order. Her publications include Redefining the Bonds of Commonwealth, 1939-1948 (2002), A Global History of Trade and...