Did U.S. attacks on ISIS open a Pandora’s box?

In October 2019, Turkey launched operation “Peace Spring” in north-east Syria.  The operation aimed at driving the Kurdish YPG out of the area to create a twenty mile-wide “safe zone” to resettle Syrian refugees that had fled to Turkey. Since then, the ongoing operation has resulted in the displacement of more than 300,000 Kurdish people and thousands of civilian casualties in Syria.

In a letter to the UN Security Council, Turkey justified the military operation by referring to the Security Council’s confirmation of Resolution 2249, that the United States and its allies had a right to use force in self-defense against ISIS in Syria because the Assad regime was unable or unwilling to suppress the threat of the terrorist organization. Turkey said its operation was similarly required to eliminate a “terror corridor” on Turkey’s Southern border with Syria. Turkey asserts that the Kurdish YPG in Syria is a terrorist group linked to Kurdish terrorists that have been attacking Turkey for years.

Resolution 2249 was unanimously adopted by the Security Council in 2015 shortly after ISIS committed deadly attacks on a Paris stadium and concert hall, killing and injuring over 824 nationals of twenty-four countries.  The resolution did not provide a stand-alone legal basis or authorization for use of force against ISIS.  Rather, it confirmed that use of force against ISIS in Syria is permissible under Article 51 of the UN Charter’s right of self-defense.

The Resolution marked a significant turning point in international law.  Prior to its adoption, most countries took the position that use of force against non-state actors like ISIS was only lawful if the group was under the effective control of the territorial state.  This position was confirmed by the International Court of Justice in the 2003 Wall and 2004 Congo cases.
Syria neither controlled nor supported ISIS.  So, the implication of this newly accepted change in the international law of self-defense is that any state can now lawfully use force against non-state actors (terrorists, rebels, pirates, drug cartels, etc.) that are present in the territory of another state if the territorial state is unable or unwilling to suppress the threat posed by those non-state actors.

The number of candidates for such action across the globe is quite large.  The U.S. Department of State maintains a list of terrorist organizations that pose a significant threat to the United States and its allies around the world, which includes fifty-eight terrorist groups headquartered in thirty-five different countries.

The dangers inherent in this new doctrine of self-defense against non-state actors are apparent from the Turkish operation in north-east Syria.  But the doctrine is not an open license to use force against non-state actors.  The threat they pose must be equivalent of an armed attack to trigger the right to use force in self-defense.  And the military action taken must meet the international humanitarian law requirements of necessity, proportionality, and discrimination between military and civilian targets.  It is not at all clear that the Turkish offensive meets those requirements. 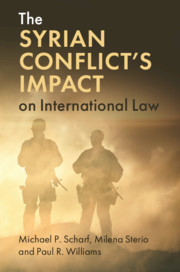 About the Author: Milena Sterio

Milena Sterio is the Charles R. Emrick Jr. – Calfee Halter & Griswold Professor of Law at Cleveland-Marshall College of Law. Previously, she was an associate in the New York City firm of Cleary, Gottlieb, Steen & Hamilton and an Adjunct Law Professor at Cornell, where she taught in the International War Crimes Clinic. She has published numerous l...

About the Author: Michael P. Scharf

Michael Scharf is the Dean of the Law School and the Joseph C. Hostetler-BakerHostetler Professor of Law at Case Western Reserve University. He serves as Managing Director of the Public International Law and Policy Group, a Nobel Peace Prize-nominated NGO. He has led USAID-funded transitional justice projects in Uganda, Cote d'Ivoire, Libya, and Tu...