Evolution of Goods and Services Tax in India 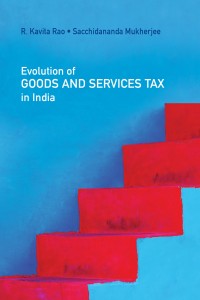 The objective of this book is to provide a comprehensive overview of the journey towards introduction of the GST in India. The book is based on research carried out at the National Institute of Public Finance and Policy (NIPFP), New Delhi, spanning over a decade. The basic objective of the volume is to highlight the contributions of the chapters in shaping the design and structure of the GST as well as capturing the evolution of the concept of GST in India since the late 1980s. The Indian GST is unique for its structure, design and administrative framework. The country-specific experience discussed in the chapters will help the readers to familiarise themselves with the alternative arrangements available from the perspective of a federal country. Designing a destination-based dual value-added tax (VAT) system for a federal country like India was a challenge. In this volume an attempt is made to capture the historical journey of policy research that was initiated since the inception of the government’s interest in a national-level GST for India in the union budget speech of 2006–07. The book is divided into three parts – Genesis and Evolution of the Concept of GST in India, Revenue Neutrality of GST and GST Administration and the Possible Impact of GST on the Indian Economy.

The successive tax reform committees constituted since Independence played an important role in shaping the Indian indirect tax system that finally culminated in the introduction of GST. The recommendations of various tax reforms committees helped in sequencing tax reforms and also paved the way for establishing destination based tax regime in Indian indirect tax system. For a federal country like India, having a fairly decentralised system of fiscal arrangement, sequencing of tax reforms plays an important role in minimising the disruption from major tax reforms such as GST.

The GST regime is evolving in many different ways – it is evolving in structure as well as in the associated compliance and administrative regimes. The evolution is desirable and helpful in as much as it addresses the concerns faced by the taxpayers. However, the evolution also implies a long transition before the regime achieves stability, which in turn introduces an element of uncertainty into the regime. The positive gains from GST would be associated partly with the structure of the new regime and partly with stability in the regime. In other words, the timeline for the economy to experience the gains from GST might be extended beyond the initial years.

What is, however, very interesting is that the graduated transition to the ‘ideal’ GST regime seems to have resulted in the Indian economy bypassing some of the anticipated shocks in the form of an increase in inflation or a reduction in growth rate. The overall context of the economy, however, is beset with a number of potential problems – increase in the international price of crude oil and stress in the Indian banking system, to name a few. These too could contribute to a delay in the speed with which the economy can extract gains from the GST regime. Any analysis of the impact of GST should therefore be suitably nuanced to take these factors into account.

R. Kavita Rao is Professor at the National Institute of Public Finance and Policy, New Delhi. Her research interests are the design and implementation of GST in India, methodology for assessing the comprehensive impact of various tax exemptions on the economy, and sectoral interlinkages and their implications in planning a growth strategy.

The Importance of Individual and...

The Importance of Individual and...

Biden on immigration: The first six...