It has long been argued that the social contract between the state and its citizens is fractured in Pakistan, in fact some have even taken it further to say that citizenship is altogether missing and that it is powerbrokers or patrons with whom localised social contracts are forged. I repeatedly found in my work that there is an alive and tangible relationship between people and the state, and it manifests in the ‘everyday’.

In the Wake of Disaster illustrates that when asked about ‘responsibility’ in the aftermath of a disaster almost all respondents invoked the sarkar (state) with a clear demand that it was the job of this abstract entity that state to keep people safe during a disaster. At the same time, it was also clear that the local encounters with the state – the long queues at the District Commissioner’s office, the postal orders that fails to reach people – often fail to live up to the idea of the state. Yet still the abstract state, the sarkar is believed to be omnipresent and can do anything it wills itself to do. While doing fieldwork in lower Sindh, I regularly came across people’s unfulfilled expectations from ‘the state’; these remained unfulfilled not only because of the inadequacies in the ‘state effects’ but also because of the enormous scale and nature of such expectations. In fact, anthropologists of the state in Pakistan, such as Martin Sokefield and Oscar Verkaaik, have noted that people’s expectations of the state in Pakistan have often been such that they cannot be fulfilled by any state anywhere in the world.

But the book also explores local discourses around haq or haqooq, used to talk about – rights and entitlements. It’s important to state that while in the field I heard the phrase ‘yeh to uss ka haq hai’ (this is their right) and the language of rights and entitlements being repeatedly invoked by people when referring to disaster relief cash transfers. Without intending to, and quite accidently then, I argue that the state pushed a progressive form of citizenship along by linking the idea of receiving disaster relief to citizenship.

Finally, on the Islamist question, the book focuses on the Jamaat-ud-Dawa (JuD) because they were the most visible and received the most press and publicity in the aftermath of this disaster. The point made in the analysis of the Islamist question is that this narrative of the Islamist groups challenging the state and providing an alternative vision to people in the aftermath of the disaster by reaching out to them with disaster relief is in fact built on a false dichotomy. It was never a question of the state versus JuD but rather the JuD was successfully operating where it was enabled and provided opportunities to operate by the state, which it was in Badin and to a lesser extent in Tharparkar, while in Thatta it encountered a hostile state and was therefore entirely insignificant. The JuD were neither wanting not entirely capable of ‘winning hearts and minds of people’ as was suggested in popular accounts.

So to conclude In the Wake of Disaster: Islamists, the state and a social contract in Pakistan seeks to dispel some long-standing truths about our understanding of the state-citizen relationship in Pakistan, and in so doing sheds new light on the way in which we understand social transformation and change in the aftermath of disasters. 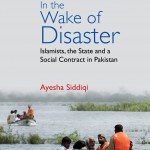 Ayesha Siddiqi is based at the Department of Geography at University of Cambridge. She was awarded an AXA Doctoral Fellowship in 2010, and completed her Ph.D in the War Studies and Geography Departments at King’s College London in 2014. She has also published with foremost scholarly journals like Geopolitics and Contemporary South Asia.